You no longer need to visit a city in Germany to see it in detail: Google Street View, the web-based photographic street mapping service, is online with images of German cities after months of public opposition. 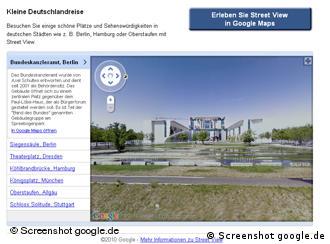 A "Street View" of the Chancellor's office in Berlin

Internet users around the world can now look at and take a virtual stroll down panoramic streets in Germany's 20 largest cities. Google Street View officially went online early on Thursday with shots from major cities like Berlin, Hamburg, Frankfurt and Munich.

As a result of a lengthy political debate in Germany, Internet giant Google has blurred the images corresponding to 244,000 objections from people who didn't want their properties to appear online - that amounts to three per cent of households affected. The photos of the properties in question have been blurred beyond recognition.

The head of Google's European office, Philipp Schindler, said at a news conference in Hamburg on Thursday that the firm had to employ an extra 200 people to deal with the objections from Germany.

In no other country did Google have to make so many concessions, Schindler added. But that was well worth it, he said: "We know that Street View is an extremely useful product."

German politicians and data protection experts are critical of the service and earlier this year, Consumer Protection Minister Ilse Aigner led a campaign against Google over fears of privacy violation.