While the UK and Ireland have cleared Google of having inadvertantly collected data over WiFi data during Street View photography, the California company may face 2.4 million euros in fines in Spain. 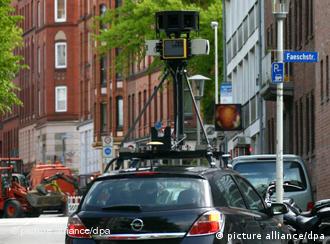 Google Street View is in operation in over 20 countries

"The Spanish Agency for Data Protection (AEPD) has opened disciplinary proceedings against Google," the government entity said in a statement on its website on Monday. The decision follows an investigation begun in May.

The AEPD alleges that Google has committed five offenses, all of which involve gathering data from unsecured WiFi networks as vehicles passed through locations around Spain to take photos for Street View.

The complaint is unrelated to concerns elsewhere in Europe about whether Street View, a service that takes systematic street-level photographs of businesses and homes, constitutes a fundamental threat to people's privacy.

The Spanish complaint is an outgrowth of revelations in Germany in May that Google had inadvertently collected some errant data over open WiFi networks, possibly including user names and passwords, financial records and other personal documents and files.

Since then, Google has been cleared of any wrongdoing in the United Kingdom and has destroyed such data under the supervision of the data protection authorities in Ireland.

However, investigations are ongoing in other countries around the world, including the United States.

Google has said it will launch Street View in Germany before the end of the year following many protests from the government and data protection authorities.

Google is facing fines in Spain of nearly 2.5 million euros

In a statement provided to Deutsche Welle, Google apologized for the data collection.

"As we have said before, we are profoundly sorry for having mistakenly collected payload data in Spain," the statement said.

"This data has never been used in any Google product and was never intended to be used by Google in any way. It's important to remember that we typically collected only fragments of payload data, because our cars are on the move and our in-car WiFi equipment automatically changes channels roughly five times a second."

The AEPD is charging Google and its Spanish subsidiary, Google Spain, for having collected and stored 13 gigabytes of data without the owner's consent. This could lead to fines totaling over 2.4 million euros.

Having filed charges, the AEPD is suspending its investigation pending the ruling of a Madrid court on a related criminal investigation.

Google plans to launch its Street View project in Germany's 20 biggest cities by the end of the year. But not all Germans are happy that their homes, cars and even themselves could be online for all to see. (13.10.2010)