Rich countries have been buying huge plots of land in poor nations in a trend that has been called a new scamble for Africa. Olivier de Schutter, the UN's point man on the issue, tells DW what to do about it. 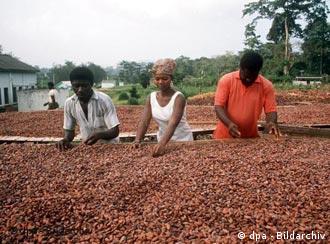 Many international institutions such as the Food and Agriculture Organisation have issued reports recently detailing the problems of the practice of so called "land grabbing," i.e. international investors buying or leasing farmland mainly in Africa. Is this really a new issue and is the attention it has gotten justified?

The issue is not entirely new. There have been in the past investors present in developing countries for the purposes of producing, for example, cotton, coffee, or other commodities for exports. But the scale at which this is now happening is very impressive. We already have information about deals representing some 30 million hectares, which is more than the total farmland of a country such as France. This is can be explained by the fact that since the global food crisis of 2007 and 2008 countries and investors have understood that agriculture is going to be a very important sector in the future and that farmland which can be cultivated will become a scarce resource.

Could you give a concrete example that highlights why land grabbing is a critical topic for the international community?

The countries targeted by these deals, particularly in sub-Saharan Africa where labor is relatively cheap and where land is considered plentiful, will be potentially increasingly dependent on international markets to achieve food security. So they will produce more food, but this food will be exported. This is one of the things we saw during the global food crisis of 2007/2008. Countries that are the least self-sufficient and most dependent on international markets have been most severely affected by increasingly volatile prices.

Supporters of land grabbing say it is an important factor in modernizing Africa's unproductive agricultural sector, that it helps establish international food security and can provide jobs for domestic workers. Are they right or is land grabbing bad per se?

No. It's absolutely important to recognize that for many years we have invested far too little in agriculture. The decline has been very significant since the 1980's. Both in official development aid and in government budgets too little attention has been paid to agriculture. So it is good news that money is now coming into the sector and that private and public investors are investing more in food production. The problem is how is this managed, how are the resources going to be shared between the governments and the local population concerned and how can the local population benefit from this investment. And at the moment the process is not transparent, the guarantees are insufficient that the arrival of investors will not worsen rather than improve the situation of the local population.

The Gulf countries, but also South Korea, India and China are considered to be most active in pursuing agricultural plots in Africa. Which of them is the biggest investor and do some countries behave more sensibly than others?

This is very difficult to answer, because it is extremely difficult to monitor the scope and scale at which these investments are developing. In many cases countries have sovereign wealth funds which have stakes in private investment funds and are behind deals which on the surface resemble deals between a private investor and a host country. In other cases these countries are present directly in developing countries in which they lease or buy land, but often the deals they negotiate are not public and they are not dealt with transparently, so it is very difficult to estimate the respective importance of the countries you mentioned. But it is clear that the crucial aspect here is whether these deals will be sufficiently monitored by civil organizations, by peasants' organizations and whether governments will act with full transparency. The key here is good governance.

What must be done to enable both international investors and the local population to profit from agricultural investments by foreign countries and companies?

There have been a few proposals concerning guidelines to be adopted at the international level. For example the Prime Minister of Japan, Taro Aso, has proposed that in the next UN General Assembly Meeting in September he would convene a round table of interested stake holders in order to achieve agreement on these principles. I think this is an excellent initiative which I salute. I do think however that already now, even before adopting such a code of conduct for guidelines we have norms which investors and host states alike should comply with. And these norms are those of international human rights instruments. For example, investors should respect the right to self-determination of the host country, which means that the exploitation of resources should primarily benefit the local population and serve local needs before serving the interests of the foreign investor. So I think we already have a number of principles which are implicit in human rights and which I try to make explicit by addressing a few recommendations to the international community as to how these deals could be better managed in the future.

The need to ensure global food security and the potential for bio-fuels to curb climate change has dominated talks at the first-ever meeting of G8 agriculture ministers. (18.04.2009)