Borussia Mönchengladbach had to settle with a single point against Mainz. Wolfsburg took all three points thanks to Naldo's second-half goal which consolidates the Wolves' spot in the top-half of the table. 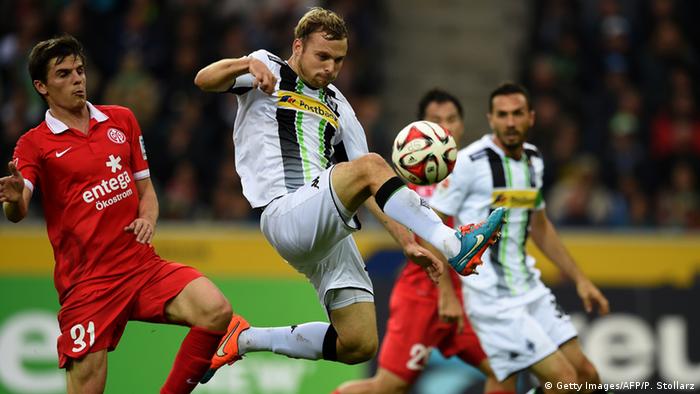 In the final game of the seventh matchday in the Bundesliga on Sunday, Borussia Mönchengladbach hosted Mainz for a clash of two of the league's four undefeated teams. The winner had the opportunity to move into second place in the table.

Instead, Gladbach missed several opportunities in the second half to pull away from Mainz and the game ended in a 1-1 draw.

Max Kruse put the hosts ahead in the 15th minute. Raffael started the play by passing forward to Patrick Herrmann in the area. Herrmann played to the ball to Fabian Johnson, who directly passed it along to Kruse for the goal.

Fifteen minutes later, Gladbach's Julian Korb was whistled for a handball in Mainz's area, giving the visitors a chance from the penalty spot. Jonas Hofmann took the penalty and even the score at 1-1.

There were no lack of opportunities for Gladbach in the remaining 60 minutes of the game, but most of their shots didn't even require Mainz keeper Loris Karius to move his feet to save.

The exception came just before the final whistle, when Christoph Kramer crossed across to Andre Hahn, who then passed to Raffael. The Brazilian's shot was blocked on the line by the Mainz defense, and then came Raffael's real brilliance: the ball came directly back to him, but instead of taking another shot, he passed off to Xhaka, who was in better position.

Both teams dropped a spot in the table due to wins from other teams. Gladbach are in third place, trailing Hoffenheim on goals. Mainz are a point behind Frankfurt and currently in seventh place.

Naldo struck to give Wolfsburg a 1-0 win over FC Augsburg. But the first Sunday match in the Bundesliga was a bit of a snooze-fest for the entire first half.

A very defensive Augsburg were successful in keeping Wolfsburg from making any serious attacks, while the visiting side themselves had a few promising situations fizzle out with imprecise shots on goal. 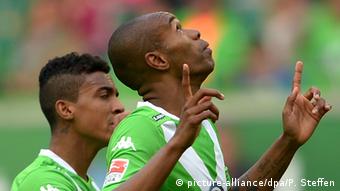 That's not to say the first half was completely without highlights: Tobias Werner and Kevin De Bruyne both chased a ball out-of-play near the corner flag in the Augsburg half.

One of Werner's boots came loose and was only half on his foot when De Bruyne was awarded a throw-in. The Belgian got ready to take the throw when Werner – complaining to the ref that the throw-in had been given – kicked his shoe off his foot, hitting De Bruyne harmlessly in the stomach and drawing a yellow card for Werner.

The second half got off to a slow start, but the home side finally found their stride just before the hour mark. Sebastian Jung brought the ball up Wolfsburg's right-hand side and passed off to Naldo, whose shot found the back of the net for the opener.

It's the second goal of the season for Wolfsburg's Brazilian defender who is proving to be a useful part of Dieter Hecking's offense. Wolfsburg controlled the rest of the match and came close on a few occasions to doubling their lead.

They are now undefeated in nine straight home matches dating back to last season – the longest undefeated home streak in the Bundesliga at the moment.

How was your Bundesliga weekend?

Not every weekend can go down in history as truly awesome, and that's no different in the Bundesliga. Here's a look at who made the most of their weekend, and who would rather forget it. (04.10.2014)

Matchday seven showed further signs of weariness in both Borussia Dortmund and Schalke's teams. Both lost over the weekend, so why is the fire going out in these top sides' camps? (04.10.2014)