Hartz IV allowances will rise by around 5 euros ($5.60) per month for single claimants. The Ministry of Labor has offered asylum seekers more services in kind after cutting their benefits by around 10 percent. 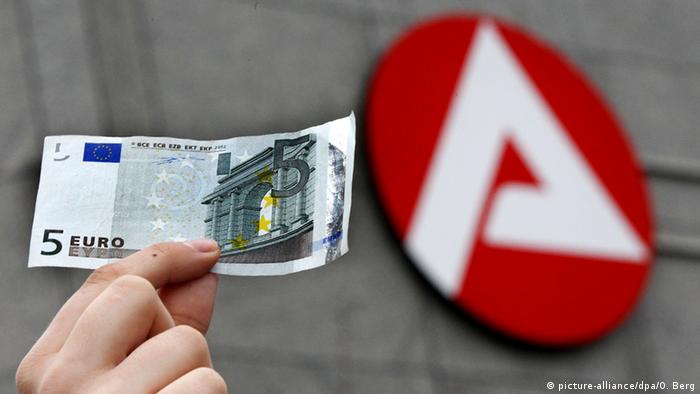 According to information provided by the Federal Employment Agency, the number of children dependent on state welfare rose by 30,000 in 2015 compared to the previous year. The worst-affected areas were Bremen and Berlin. (31.05.2016)

Germany's labor minister has drafted a bill which seeks to cut social benefits for foreigners from other EU countries. The proposal also includes a loan for a ticket home for those blocked from welfare in Germany. (28.04.2016)

German households receiving unemployment and social benefits, known in Germany as the Hartz IV plan, will a see a slight rise in the money they receive from next year.

Following a cabinet meeting on Wednesday, the government said that claimants will see their welfare packages increase by about 5 euros ($5.60) per month.

"We are adapting the contributions to the fund's low-wage earners have at their disposal and what they can spend," said the Social Democratic Party member (SPD) Andrea Nahles, who drafted the new bill. "The new reforms guarantee the living necessities, even if it is clear that they will not provide a great jump forward."

The bill, however, sees around a 10 percent reduction in benefits paid out to asylum seekers, to 332 euros ($370) per month. The Federal Ministry of Labour and Social Affairs (BMAS) ensured that the reason behind the reduction was because contributions towards basic living, such as electricity and property maintenance, will now be offered to asylum seekers in kind. The Ministry stressed that there would be no reduction in life among asylum seekers.

Scheduled to come into force on January 1st, 2017, the rise in Hartz IV allowances is expected to cost BMAS an additional 470 million euro to 590 million euros ($520 million to $658 million) more than in 2016, according to reports.

The new allowances were calculated based on recent statistics released on the living standard of private households, which took rising prices and incomes into account.

Criticism directed from the left-wing

German left-wing parties voiced their criticisms of the new reforms.

The leader of the Left Party, Katja Kipping has called for Hartz-IV in its current format to be completely repealed. "With these targeted micro-calculations in the Hartz IV rules, Nahles has authorized the impoverishment of broad social strata," she said.

Ulrike Mascher, the president of Germany's largest association for pensioners and the disabled, 'VdK Deutschland,' said the bill disappointed because it did not offer any significant improvements to the methods determining allowances, "and, ultimately, nor to the recipient."

Other groups said that the rise in benefits is not sufficient. For example, the association for social rights and equal opportunity, known as 'Der Paritätische Wohlfahrtsverband' has called for a rise of up to 520 euros ($580) per month.

The Hartz IV reforms have drawn considerable criticism since the laws took effect in 2005. While they have led to a significant reduction in unemployment, flexible labor market reforms have allowed for a sharp rise in part-time workers in low-income jobs, causing an increase in the number of people receiving welfare benefits.

Overall, around 7 million people in Germany receive Hartz IV benefits, 2 million of which are unemployed.

It is estimated that BMAS pays out around 35 billion euro ($39 billion) per year in welfare.