There's a hiking trail in Brandenburg that promises dozens of calm lakes, indescribable natural beauty and Cold War artifacts. The catch? It's 416 kilometers long. DW's Katherine Sacks has taken on the challenge. 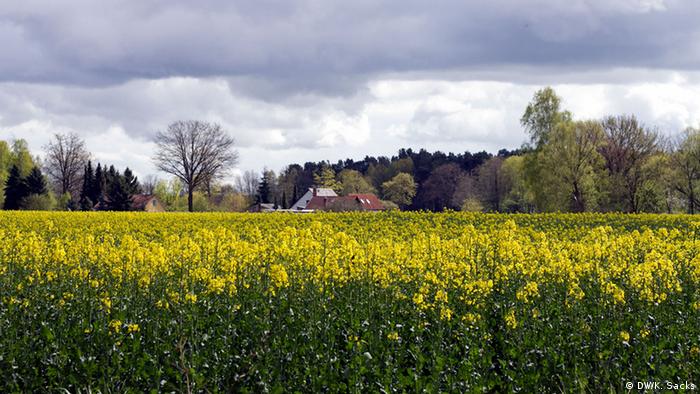 On a restless afternoon at the beginning of the year, my boyfriend and I wanted to get out of the city and stumbled upon the 66 Lakes Trail by way of an Internet search. The enormity of it - a 416-kilometer (258-mile) path broken into 17 trails that form a circle through the state of Brandenburg -, the near-yet-just-far-enough location, and the lush, green photos won us over immediately.

To get our feet wet - or at least dusty -, we picked a small section of one of the trails near Strausberg that was easy to get to. After an hour-long train ride, we found ourselves deep in a marshy wooded forest surrounding the Herrensee lake. Although we were just a hop and a skip from the center of Berlin, it felt as though we had stumbled into a setting suited to fantasy movies and crime thrillers.

Walking through the forest, we were awestruck at the natural beauty so close to our urban apartment. Passing blue and white markers every few minutes on the trail, we speculated about who maintained them, what marvels lay ahead of us and - most importantly - how long the entire 416 kilometers might take.

"We could do the whole thing this year," I impulsively suggested, "Like our own 2014 challenge." As we walked, we discussed the possibilities of biking some of the 17 routes, staying overnight to hike two days in a row, and maybe even running a trail. By the end of the day, as the sun set and we rode the train back to Berlin, we had decided to take on the challenge.

A few weeks later, we tackled the first full trail. With the help of wanderkompass.de, my boyfriend managed to sort out all the details, taking photos of the trail map that we could follow en route via our mobile phones. I packed our bags with water, picnic supplies and other necessities, and we were off. 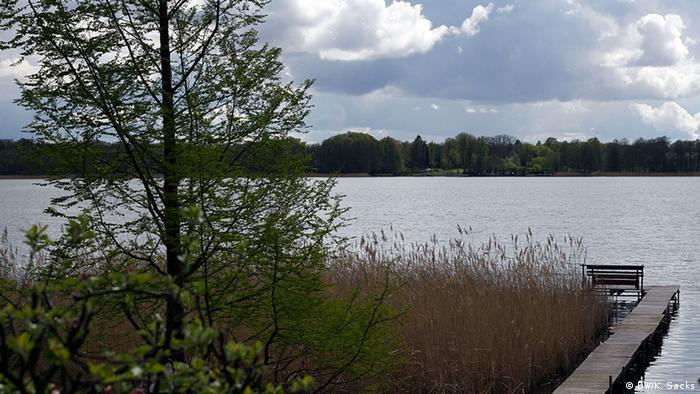 This impressive view of Wandlitz Lake on trail five comes with a price: sore feet

We were already familiar with much of the first trail, which starts in Potsdam and winds through the parks surrounding the Sanssouci Palace. But we were still thrilled to see our first lake - a sure sign we indeed had found the right path - just a few minutes away from the palace's flowery gardens. The remaining hike cut through wide stretches of Brandenburg farmland and pastures, past several more lakes, and ended at the quaint Marquardt palace and garden. As we rode the train back to Berlin I was invigorated by our accomplishment - 20 kilometers! - and couldn't wait to embark on the next route.

That, however, turned out to be a bit boring in comparison to the first: a gravel path mainly following a canal near a busy highway. As we continually passed bridges spanning the canal, we nicknamed it The Bridge Trail. Reaching the end, we considered skipping the more monotonous segments. But we had committed to finishing the entire trail by the end of the year and couldn't bear the thought of "cheating." Route three, a lovely hike by horse pastures and old ruins, proved that it really was worth sticking to the plan.

The trail master and the guardians

By the fourth trail, my curiosity was getting the better of me. This path, stretching from the towns of Hennigsdorf to Wensickendorf, was not as well marked as the first three and a wrong turn added another four kilometers to our hike. After having clocked up 24 kilometers already, that was not only hard on my legs, but also on my weary psyche. 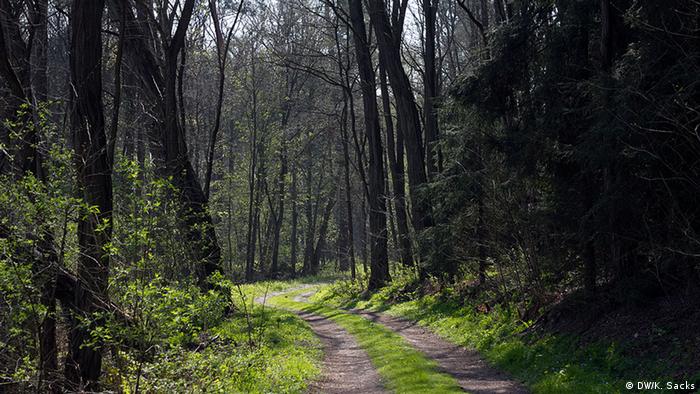 To find out more about the 416 kilometers we'd dedicated our year to, I contacted Manfred Rescheke, the author of a book on the 66 Lakes Trail. The first thing I learned from him was that the name itself is a misnomer: The route actually passes 72 lakes, making a complete circle around Berlin through the Brandenburg countryside. Working with Berlin's office of regional parks, it was Rescheke himself who established the trail in the late 1970s after retiring from the printing industry. He wrote his book based on his own experiences hiking in Brandenburg and out of his desire to promote hiking.

Rescheke also had an explanation for the blue and white trail markers we'd followed on our treks. Each of the 17 sections is managed by a volunteer group that makes sure the markers are well kept (although, as we found, some sections are better marked than others). Most are painted onto trees, but some are stuck on bridges, the sides of buildings or large poles. After learning this, we often pictured these anonymous guardian hikers laughing about where to position the markers.

A long and winding road

Over Easter weekend, we decided to up the ante by trying our first overnight trip and booked a simple room in Biesenthal near the end of trail five. The winding journey passed by the Liepnitzsee lake, where we saw fishermen out enjoying the water, merrily calling out "Frohes Osterfest! Happy Easter!" When we reached our guesthouse after 25 kilometers, we were not only exhausted, but also famished and relieved to find a Greek restaurant in town where we could recharge with roast lamb, moussaka, and several celebratory shots of ouzo.

Because we hadn't been able to find lodgings at the trail's end, we had to add the remaining five kilometers to the next day's walk for a whopping 35 kilometers in one stretch. The hike started with a dewy morning trek through an impressive field and included several lakes (and some delicious German doughnuts) along the way. Despite the extra sugar, we were still exhausted and sore beyond belief by the end. 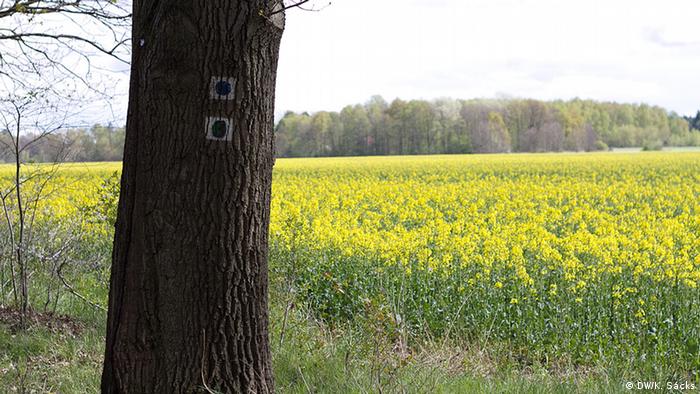 Giving up was not an option, but we did pick up the pace and give our aching joints a break on trail seven by tackling the route by bike. Much of this trail hugged a lake with snaking paths and some elevation, which is unique for the otherwise level region. Though biking meant completing the leg in a third of the time, the lakes and woods flew by. I missed taking our time and noticing the odd shapes in the tree bark and the ripples in the lake water as we passed.

With more than a third of the 17 segments behind us, I was eager to hear about other hikers' experiences and spoke with local Boy Scout troop leader Coleman Cain, who'd led his boys down a few of the trails.

"When I found out that the whole trail circumnavigated Berlin, that was a carrot to hang out in front of the scouts," he said, adding that the length of the trails made them suitable for a full-day hike.

While the Boy Scouts had badges to earn, our carrots were mostly theoretical. However, Cain told me the troop had stumbled on Albert Einstein's birthplace and remnants of the former Soviet occupation after World War II including an old rifle range and an abandoned aircraft hanger, so as it turned out, a few tangible incentives were still awaiting us. 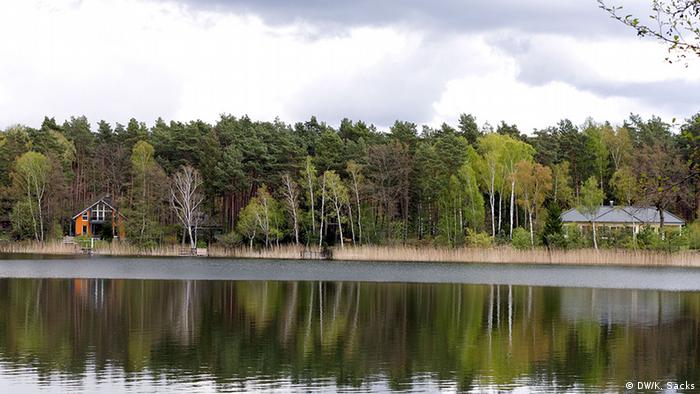 By the time we tackled trail eight in late June, summer had finally arrived in Brandenburg. we dressed for the weather, but managed to forget both our lunch and bug spray. The result: 23 kilometers in the heat, craving food while being eaten by mosquitoes. The only respite was a dip in the dazzling Stienitzsee. This trail winds along homes set on wooden decks, giving it the marshy look of the Florida Everglades, and ends with a Venetian-like canal. Both sceneries seem so out of place against the buzz of urban life in nearby Berlin.

That's been the real treasure of the trails: their diversity. In one 20-kilometer hike, you can be surrounded by immense pine forests, walk by swampy lakes and beachy shores, tramp through arid fields, and traipse through plush green fields all in one day. Medieval ruins, Cold War remains and modern housing developments are juxtaposed, as if you're passing through Hollywood sets.

Sundry homes, ranging from traditional farm houses to miniature mansions, line many of the trails, while other hikes continue for hours through fairytale-like forests full of wildlife.

With nine segments still to go, we are on track to complete the entire 416-kilometer ring by the end of 2014. Trail founder and author Manfred Reschke has completed the entire route eight times over the course of 16 years, picking up the sections at various times throughout the year. We plan to continue to do one or two trails a month, packing in as many as possible before the days taper.

The thing about hiking is, no matter how you do it, it's healthy and free. Maybe we'll spend 2015 doing the 66 Lakes Trail the other way around. 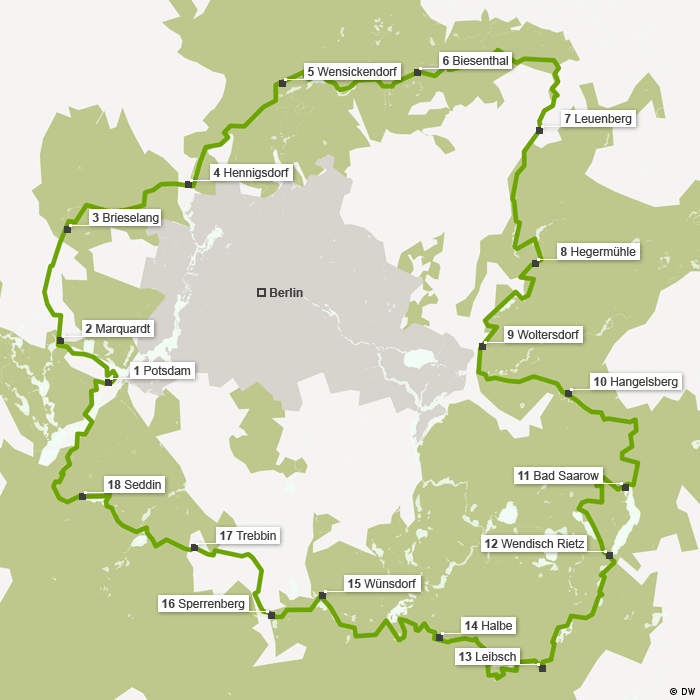 Each of the 17 routes makes for a good day trip

The Berlin they grew up in was completely different, run by either the Nazis or the communists. As the Prenzlauer Berg neighborhood now gentrifies, DW's Leah McDonnell speaks with those who were there first. (17.07.2014)

Uncork the mystery of Germany's Frühburgunder

One of Germany's smallest wine regions with some of the boldest wines, the Ahr Valley has a tradition as both innovator and iconoclast. No grape variety invites as much intrigue as the region's very own frühburgunder. (10.06.2013)

Germany is home to 67 regions nicknamed after its southern neighbor. But only the one in Saxony earned its moniker from a pair of Swiss artists. DW's Jefferson Chase took a hike along the region's famous Painters' Way. (10.09.2013)