According to the German Federal Office for Statistics, 70 percent of families have a "classic structure" of married parents with a least one child. Since 1996, the number of single-parent families has risen by 6 percent. 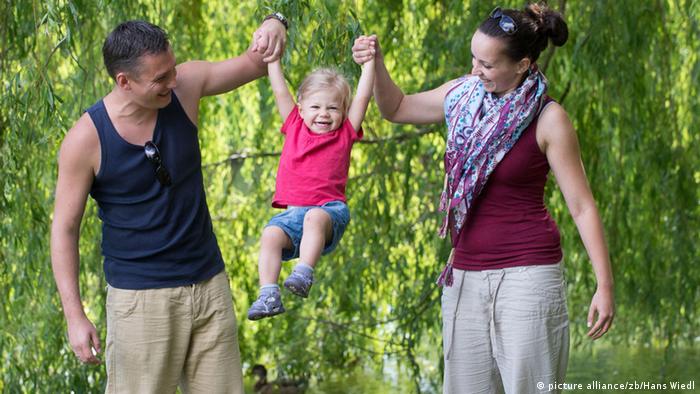 A report published by the German Federal Statistical Office on Monday has found that the "classic structure" of a married couple with a least one child remains the most popular family type in the country, with 70 of people surveyed complying with the "traditional" model.

The report also found, however, that, since 1996, the number of German families with married parents had decreased by 11 percent. In the same time frame, the number of single parents has increased from 14 percent to 20 percent.

According to the "Mikrozensus 2013," the number of unmarried or same-sex relationships with at least one child in Germany has also increased from 5 percent to 10 percent.

Significant differences between German states were also clear from the statistics. At 78 percent, the southwestern state of Baden-Württemberg, Germany's third-richest, has the highest number of married couples, with at least one under-age child and the lowest number of single-parent families, at 16 percent

At the opposite end of the scale, Berlin had the highest proportion of single-parent families, at almost a third. Such units account for about 20 percent of those nationally.

Most unmarried long-term relationships with a child were found to be in the eastern states of Saxony and Saxony-Anhalt, where 23 percent of assessed families hadn't taken the vow.

In the Interview: the Director of the British Museum Neil MacGregor (19.10.2014)

The German Ethics Council has made a daring move and opposed the criminalization of incest between siblings. The matter was put to the council after appeals made by a Leipzig man over a relationship with his sister. (24.09.2014)