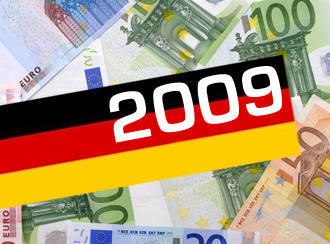 Germany is facing a surge in new state borrowings

Germany's finance ministry has warned of a "dramatic increase" in public debt in Germany over the next five years because of the global economic crisis and government responses.

The ministry's provisional figures indicate almost a doubling of new borrowings next year to 86 billion euros, compared to the 47.6 billion euros adopted on Friday in a supplementary budget for 2009. New borrowings, to plug the gap between public expenditure versus revenues, are already at a post-war record. 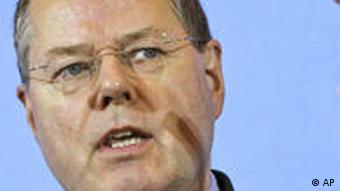 In the Bundestag parliament, Finance Minister Peer Steinbrueck said the sharp recession and stimulus packages recently enacted by Chancellor Angela Merkel's coalition government, had led inevitably to a combination of falling tax revenues and higher borrowings. Calls by some to lower taxes were "illusory", he added.

Ahead of Germany's federal election in September, several opposition parties slammed the latest projections. Liberal Free Democrat party spokesman Jürgen Koppelin said Germany was financially worse off than at the beginning of Merkel's coalition in 2005 - despite efforts in recent years to consolidate budgets. Koppelin demanded a cash audit straight after the election and rigorous re-examination of all expenditures.

The Greens' budgetary expert Alexander Bonde said the projected 86 billion euro gap in projected new borrowings was a "fatal" development. By 2013, he added, total government debt would be much higher.

Ministry projections to be presented to Merkel's cabinet next week show new state borrowings for 2011 of 71 billion euros and 59 billion euros in 2012.

Total federal public expenditure next year is set to rise by eight percent to 328 billion euros but then decline somewhat by 2013 to 313 billion euros.

Next year's biggest spender will be the Federal Ministry of Labour and Social Affairs, representing half of the overall budget. Its spending includes funding for Germany's 3.5 million unemployed and 1.2 million workers on so-called Kurzarbeit, subsidised shortened working hours.

The European Commission, which monitors the deficits of European Union countries, has forecast that many member nations will breach budgetary limits in 2009 and 2010. Under the EU's Stability and Growth Pact, eurozone governments are not supposed to run up deficits beyond three percent of each country's Gross Domestic Product or GDP.

A limit on government deficits is on its way into the German constitution after it was passed by the country's legislative upper house. (12.06.2009)