German exports plunge amid economic slowdown | Germany | News and in-depth reporting from Berlin and beyond | DW | 09.06.2009 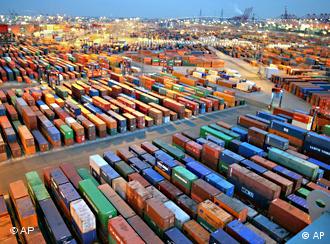 German exports plunged by an historic 28.7 percent in April from the same month a year earlier, according to figures released on Tuesday by Destatis, the national statistics office in Wiesbaden.

This marks the strongest decline in six decades with the value of German exports amounting to 63.8 billion euros ($88.5 billion) -- a seasonally-adjusted 4.8 percent drop on March 2009.

German exports within the European Union suffered a 29.9 percent drop, and trade outside the 27-member bloc witnessed a similar decline of 26.5 percent.

Looking at this year's January-April period, German exports amounted to 262.8 billion euros, down from 341.3 billion in the same period a year earlier, according to Destatis.

While the data released on Tuesday did not bode well for the future of the German economy, some analysts underlined that things were not as bad as the year-on-year comparison suggested.

Several months in 2008 had been exceedingly good for German exports, and this effectively rendered the gap with the crisis year 2009 a lot larger than usual.

Germany's export-driven economy has been slammed by the global economic slowdown and the government estimates that gross domestic product (GDP) will shrink by a whopping 6.0 percent this year.

In the first quarter of 2009, the economy contracted severely by a 3.8 percent, however, analysts believed the rate of decline was beginning to slow in the second quarter.

Despite the dismal figures, Germany's economics ministry said it was optimistic for the future.

"The downward trend has slowed noticeably," the ministry said in a statement. It added: "The odds that industrial production has hit its lowest point have improved due to stabilizing demand ... and better confidence indicators."

Despite signs that the global recession was tightening its grip on Germany, unemployment in Europe's biggest economy rose less than expected in February, data released Thursday, Feb. 26, showed. (26.02.2009)