Germany to limit public debt in constitutional amendment | Germany| News and in-depth reporting from Berlin and beyond | DW | 12.06.2009

A limit on government deficits is on its way into the German constitution after it was passed by the country's legislative upper house. 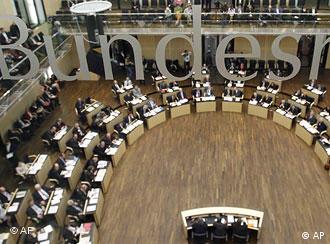 The Bundesrat, which is made up representatives of Germany's 16 states, voted 13-3 to approve the constitutional amendment limiting government debt. The amendment was adopted by the Bundestag lower house last month, and now only needs to be signed by the president and published in the government gazette to come into force.

The amendment primarily affects the states' budgets, only allowing them to take on new debt as they pay off old debt beginning in 2020.

Rules for the federal government are to take effect in 2016 and allow an increase in borrowing of just 0.35 percent of the country's gross domestic product (GDP).

The amendment comes with various built-in exceptions and the federal government can sidestep most of the limitations by declaring an emergency.

While borrowing will be allowed during recessions, governments will have to reduce their debt when good economic times return.

Critics on the left of the political spectrum say the amendment will limit the ability of the government to help the poor, while those on the right say the exceptions water down the measure so much that it will not stop the growth of public debt.

France says this is no time to be strict about Maastricht

In the fog of the global economic crisis, France has called on Brussels to relax the Maastricht stability pact criteria thereby cutting EU countries some slack over mounting budget deficits. (02.06.2009)

How can the German government pay off its massive state debt? The German Institute for Economic Research (DIW) says the answer is to raise VAT to 25 percent from 2011. (28.05.2009)

Germany is reportedly facing a severe slump in tax revenues. The economic downturn is definitely taking its toll, but not everybody believes the German state is short of money. (09.05.2009)