German President Joachim Gauck has made it clear that the worldwide implementation of human rights is a subject close to his heart. On a visit to key courts in the Hague, he called on more countries to join up. 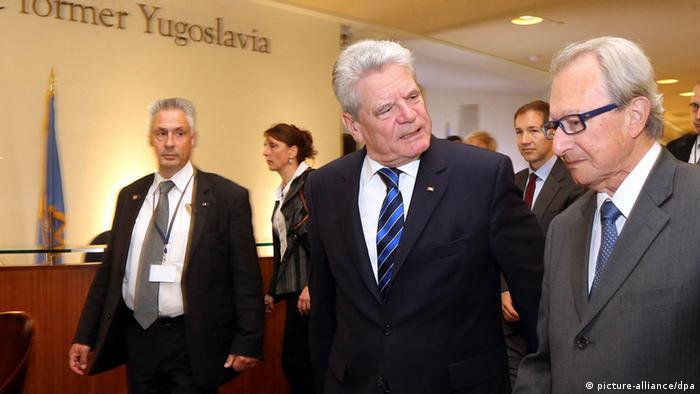 Joachim Gauck toured the capital of international justice on Thursday, speaking with key officials and even dropping in on the ongoing trial of former Bosnian Serb general Ratko Mladic. The military commander is facing charges of genocide, war crimes and crimes against humanity stemming from Bosnia-Herzegovina's 1992-95 war. Gauck called his brief glimpse inside the courtroom "a very special experience."

"If we want to do something for democracy and human rights, then we have to strengthen the judicial authorities," Gauck said.

The German president also said that "it of course troubles us" that allies like the US and Israel had not ratified the ICC's jurisdiction, thus shielding any of their citizens from prosecution in the international court. Gauck said that although he did not want to expressly criticize this position, "I won't forget the issue."

Along with the US and Israel, Russia, India, Turkey, Egypt and dozens of other countries have signed, but not ratified the ICC treaty. China has neither signed nor ratified it.

The German president has paid special attention to international institutions in recent months, having also visited the European Parliament in Strasbourg and the UN's human rights headquarters in Geneva.