The three European leaders will travel to show solidarity with Ukraine

Andriy Melnyk, the Ukrainian ambassador to Germany, is well known for his sharp wit. As news began to emerge that German Chancellor Olaf Scholz was planning to visit Kyiv together with two other European leaders — French President Emmanuel Macron and Italian Prime Minister Mario Draghi — Melnyk posted a photo on Twitter of five tanks, together with the following message to the German government: "Why do you deny the Ukrainian army access to these Marder infantry fighting vehicles available immediately from Rheinmetall, as the Ukrainian forces were bleeding to death before your very eyes?"

Shortly thereafter came an update. "The people of Ukraine expect that during his visit to Kyiv Chancellor Olaf Scholz will announce that he is bringing with him a new relief package of German weaponry, which absolutely should immediately include the deliverable Leopard-1 tanks as well as more Marder armored infantry fighting vehicles," Melnyk told the dpa news agency.

Ukrainian President Volodymyr Zelenskyy had previously called for more dispatches of additional and quicker consignments of Western weapons. Ukraine has said it needs some 1,000 heavy artillery weapons (howitzers), 300 multiple rocket launchers, 500 tanks, 2,000 armored vehicles and 1,000 drones. "We need assurance from Chancellor Scholz that Germany supports Ukraine. He and his government have to decide," Zelenskyy said in an interview with German public broadcaster ZDF. And the mayor of Kyiv, Vitali Klitschko, was quoted in Germany's mass-circulation tabloid Bild as saying: "What we need from the three leaders of the most important countries are tougher support sanctions and weapons as quickly as possible." Both have stressed their conviction that Russian President Vladimir Putin's ambitions extend far beyond Kyiv. 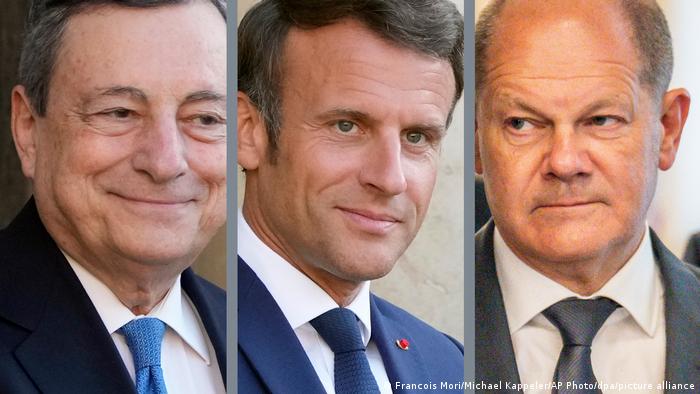 Mario Draghi, Emmanuel Macron and Olaf Scholz are expected to travel to Kyiv

There are now high expectations for a visit by the Italian, French and German leaders, especially because the latter has taken his time to make an appearance in Kyiv despite having been officially invited to visit the Ukrainian capital. In April there was a reported diplomatic snafu due to the Ukrainian government being displeased with German President Frank-Walter Steinmeier's earlier soft stances toward the Kremlin — which the president acknowledged as mistaken.

The uncomfortable situation only began to calm after Steinmeier and Zelenskyy got together to clear the air. Even then, however, Scholz demurred: "I'm not going to line up and become one of those people who'll do anything for another quick photo op," he was quoted as saying in mid-May. 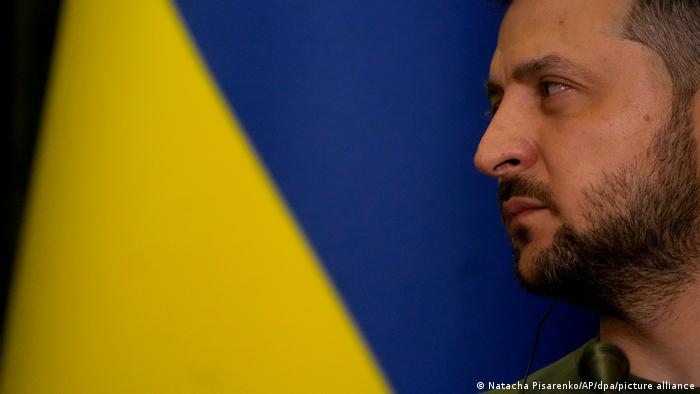 When will Germany deliver weapons?

In the meantime, Conservative opposition leader Friedrich Merz beat the reluctant chancellor to Kyiv. He was in turn followed by Foreign Minister Annalena Baerbock, of the Green Party. But by that time the likes of UK Prime Minister Boris Johnson had also visited, promising further military and economic support via a worldwide alliance.

British, American, and Eastern European politicians were quick to come up with the goods: more weapons. Scholz, meanwhile, continued warning of a third world war and refused to send heavy weapons until increasing pressure from Washington forced his hand. The chancellor then promised, alongside tanks and howitzers, the Iris-T air defense system and four multiple rocket launchers. So far, however, it seems that all that has been delivered is some light weaponry and munitions.

"It's time for deeds to follow words," says Henning Hoff of the German Council on Foreign Relations. "Ideally, he would have joined the French president's visit to Kyiv after Emmanuel Macron was re-elected. That would have been a strong signal of solidarity and support. But better late than never." Now, Hoff says, the time has come for the chancellor to "correct that failure," and address the delivery of the promised missile launchers and air defense systems.

The sense of grievance felt in many parts of Eastern Europe over the German chancellor's handling of the situation, or lack thereof, was once again made plain at a meeting in Vilnius of heads of state and government from Lithuania, Latvia, and Estonia. The former Soviet republics fear that they could be the next victims of Russian aggression if Putin is successful in Ukraine.

Scholz has repeatedly come back to the mantra: "Russia must not be allowed to win this war." But time and again, he has refused to say that Ukraine should win the war. Latvian Prime Minister Krisjanis Karins was apparently referring to that lack of clarity recently when he said "Our goal is clear: Russia must lose this war. And Ukraine must win it."

Estonia's prime minister, Kaja Kallas, was just as outspoken during a visit to Berlin at the end of April: "We are 65 times smaller than Germany. But we have put forward six times more military assistance than Germany."

Moreover, many Eastern Europeans were very irritated when Scholz and Macron held a joint phone call with Putin — without consulting them. Macron had repeatedly warned that Russia should not be humiliated and Putin should be offered a face-saving exit strategy. Lithuanian President Gitanas Nauseda pointed out, in Scholz's presence, that "it is very complicated to negotiate with a dictator."

Polish President Andrzej Duda went even further. On June 9, he told Bild his take on the closed-door negotiations with Putin: "These talks are useless. What do they do? They only legitimize a person responsible for the crimes committed by the Russian army in Ukraine. Putin is responsible for it. He decided to send the troops there. The commanders are subordinate to him." Duda saw parallels with the Nazi period in Germany: "Did anyone talk to Adolf Hitler like that during World War II? Did someone say Hitler had to save face? That we should proceed in such a way that it is not humiliating for Adolf Hitler? I have not heard such voices." 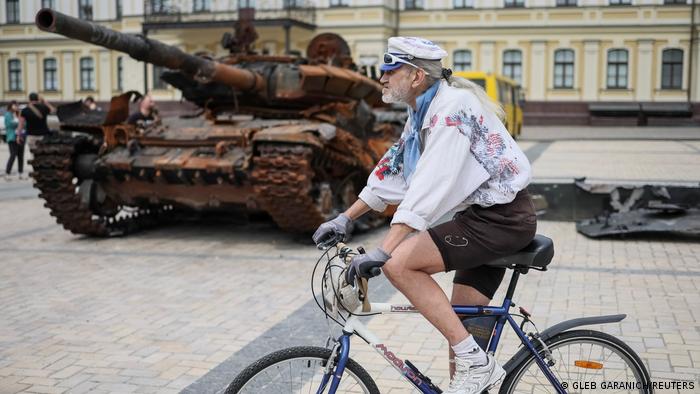 The fate of Ukraine

What Ukraine and other countries in Eastern Europe are still missing from Scholz is a clear commitment to a Ukrainian accession to the European Union. The significance of such a commitment goes beyond the prospect of later membership, the Neue Zürcher Zeitung wrote on June 4: "The refusal to give Kyiv security guarantees for the time after the war, for example through the prospect of EU membership," is in effect an act of "appeasement" toward Putin.

"Macron and Scholz act as if the fate of Ukraine is of secondary importance to them. The impression may be wrong, but perception is also a reality. This is especially true in war, where morale can make all the difference. On this level, Berlin and Paris are making themselves into the Kremlin's involuntary helpers."

Anglophone media, on the other hand, have been more Scholz-friendly as of late. "Against the background of its history and its pacifist political history, Germany is helping Ukraine more than many expected," wrote the Economist. And Thomas Friedman marveled in the New York Times about how Germany had abandoned almost overnight its 80-year-old fear of conflict, massively increasing its defense spending and planning to supply arms to Ukraine.

Henning Hoff from the German Society for Foreign Relations draws a mixed balance: "More has happened in German security and defense policy in the past three months than in three decades, supported by clear majorities in the population." From the point of view of Berlin's allies, however, Germany is only now arriving in the present. "More is expected of Germany, namely to take on the mantle of leadership, much more clearly than before."

Will Germany do that, along with France and Italy? For his part, Scholz has rejected the accusation that he is hesitant or unwilling to deliver on his government's promises. The chancellor responded to the Ukrainian ambassador's and president's critiques, arguing that simply sending the weapons is not enough. "We're dealing with really heavy equipment here. You have to be able to use that; you have to be trained for that. That's currently taking place in Germany." He further stressed that all promised weapons will be delivered.

Meanwhile, speculation and high expectations continue about what exactly a joint visit to Kyiv by Scholz, Macron, and Draghi would bring. It remains to be seen whether they can be fulfilled.

War in Ukraine: What is Germany's strategy?

Germany has been walking a fine line since Russia invaded Ukraine. Although it has joined Western sanctions and sent some weapons to Kyiv, its response has been seen to be far more muted than that of other allies.