A Jewish group in Germany has given its approval to the publication of a version of Hitler's manifesto with scholarly annotations. The book is scheduled to be reprinted in its new edition in January. 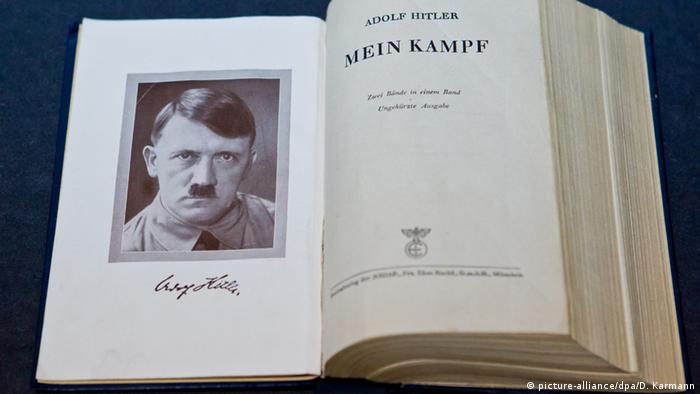 The Central Council of Jews in Germany said it approves of a specially annotated version of Adolf Hitler's notorious autobiographical manifesto, a month before the book is set to become part of the public domain.

Originally published in 1925 and 1926 respectively, the two volumes have not been published in Germany since the end of World War II. However, the Institute of Contemporary History in Munich said it plans to publish a critical, annotated version of "Mein Kampf" in January.

In an interview with the German daily newspaper "Handelsblatt," Josef Schuster, head of the Jewish organization, said the publication of "Mein Kampf" could prove valuable, but also that it needed to be monitored.

"Knowledge of 'Mein Kampf' is still important to explain National Socialism and the Holocaust," Schuster said, referring to the political ideology of the Nazi Party and the genocide that led to the deaths of some six million Jews.

He went on to say it was important that authorities prevented the spread of unannotated copies of the book.

People in Germany who publish unedited reprints of the book face charges of inciting racial hatred - a crime in the country that can carry up to five years in jail.

He's back! Hilter's Tour of Germany

Have something to say? Add your comment below. The thread closes automatically after 24 hours.

A new play explores the myth behind 'Mein Kampf'

The copyright on Hitler's book will expire at the end of 2015. Amidst the current political discussions, the theater collective Rimini Protokoll created a play which aims to demystify the controversial work. (04.09.2015)

Legal battles over use of Goebbels diaries

The English version of a Goebbels biography is due in May. The estate of Hitler's propaganda chief is suing Random House for using excerpts of the Nazi's journal. Should the heirs of a war criminal get royalties? (24.04.2015)