Germany′s Greens focus on foreign policy as political winds change | Germany| News and in-depth reporting from Berlin and beyond | DW | 15.11.2019

Germany's Green party is still riding high in opinion polls and has a good chance of being part of the next government. As the party convenes at its annual congress this weekend, its platform is broadening. 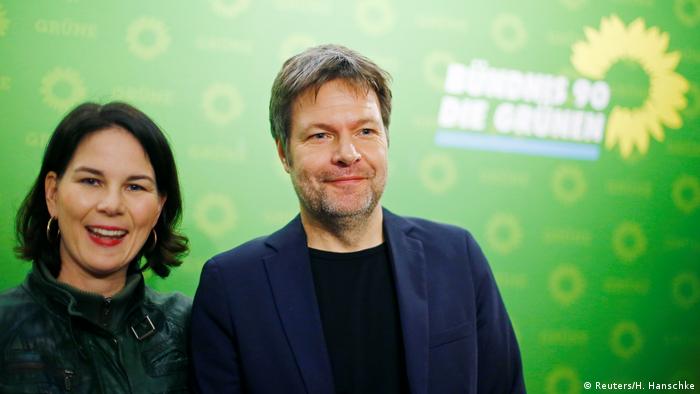 In stark contrast to the current strained relations between Germany and France, German Green Party co-leader Robert Habeck didn't hold back during his recent visit to Paris, where he met with French President Emmanuel Macron's ruling party La Republique En Marche. Even if his school French is on a rather poor level, as he admitted, Habeck didn't tire of criticizing the current German government for its European course: too little momentum, too few original ideas, too little commitment to more democratic reforms in the community. It is a stance that has gained the Greens more support than ever.

Europe is one of the central fields the Greens want to profile if they plan on forming a coalition government come the next federal election, due to be held in fall 2021. If current polls are anything to go by, the chances of the Greens being part of the next German government are almost a given. As the party heads to the western German town of Bielefeld this weekend for its annual party conference, the Greens were polling nationally in second position with 22% — just 2% behind Chancellor Angela Merkel's conservative Christian Democrats (CDU). For months, the Greens have been consistently polling above the 20% mark. In May's European elections, they walked away with 20.5% of the vote, and more than doubled their number of MEPs to 21.

Come 2021, the most likely outcome would be a coalition with Merkel's CDU — without Merkel herself, who has already announced that she won't be running for a fifth term in office. The Greens have come a long way from their environmental roots, and with the mainstream centrist parties having increasingly adopted a more environmentalist stance, the Greens have staked out their own territory on a host of issues. They also benefit from a populace that has to some degree tired of governments run by the center-right CDU and its junior coalition partner, the center-left Social Democrats (SPD).

Strengthening Europe, fighting right-wing populism, and reviving international institutions are some of the Greens' foreign policy priorities. Habeck's co-leader Annalena Baerbock told DW: "We see that Europe is unfortunately not really able to talk together about foreign policy right now." The EU recently denied North Macedonia and Albania promised accession talks, largely due to French pressure, which the German government had criticized. "In my view, that was really fatal in terms of security policy," Baerbock said, warning that the EU's dismissive course towards Turkey has continued until Ankara moved away from Europe. "The same mistake should not be repeated in the Western Balkans," she told DW.

Instead, the Greens want to maintain accession prospects, even in difficult times facing the EU. Omid Nouripour, the party's parliamentary foreign policy expert, is also focusing on Europe. "Firstly, if we are involved in a government, we will give priority to European unity, so that projects that are very divisive, such as the Nordstream 2 pipeline are no longer supported," Nouripour told DW. "Secondly, we would be much braver and thirdly, with regards to all international relations, we will focus on the cooperation between societies, especially civil societies, and not just talking together from one government to another. At times when civil societies are under pressure, this is a must," he said.

This issue in particular points to a possible conflict with the conservative CDU. The current coalition government between the CDU and the Social Democrats (SPD) has repeatedly opposed any criticism from the EU against the controversial Nordstream 2 gas pipeline, which will run from Russia to Germany. The Greens' opposition, however, could restart the conflict.

For a 'Green New Deal' in Europe

Of course, Green MP Franziska Brantner also considers the party's core issue — climate protection — to play a role in the Greens' foreign policy. "We want to deal with the climate crisis together and create a chance for Europe. The Green New Deal is our focus for this. We have green partners in three governments, including a country that is currently holding the EU Council presidency. But, fortunately we can also pull together with other partners to make the Green New Deal happen – partners who are all waiting for Germany."

The Greens are currently governing in Lithuania, Luxembourg and Finland — the latter currently holds the rotating European Council presidency. Austria's conservative People's Party is also talking to the Austrian Greens about a possible coalition. Participation in the government of a core EU country like Germany would significantly increase the overall green prospects for Europe.

Germany's Green party isn't a complete stranger to government positions, however. Between 1998 and 2005 they were part of a coalition with the Social Democrats (SPD), despite winning only 10% of the votes. But it was never going to be a match made in heaven. Former Green MP and then-Foreign Minister Joschka Fischer, for example, voted in favor of Germany's first war effort since the Second World War — without a UN mandate — and German troops took part in the deployment of NATO in the Kosovo war. The decision almost tore apart the traditionally pacifist Greens.

When it comes to foreign missions concerning the Bundeswehr, there is almost never a joint stance among the Greens; there are advocates and opponents. The Greens learned the hard way that holding on to the position of a governing party is rather difficult.

Today's Greens, on the other hand, are seen as far more pragmatic and more willing to compromise than the Greens of the 1998-2005 coalition — even on conservative positions.

With just under two years to go until Germany next plans to head to the polls, the party still has enough time to prepare for potentially joining the next coalition government.  Now they face the task of finalizing their years of work to prove they aren't a one-issue party.

As Germany prepares for federal elections, there's one place the Green party doesn't have to win over - Heidelberg. Young, well-off and well educated, this city boasts double the national average in Green voters. (28.08.2017)