Germany's first crowdfunded train has made its first journey from Stuttgart to Berlin - arriving five minutes early. Berlin-based startup Locomore knows its one train isn't much competition for the giant Deutsche Bahn. 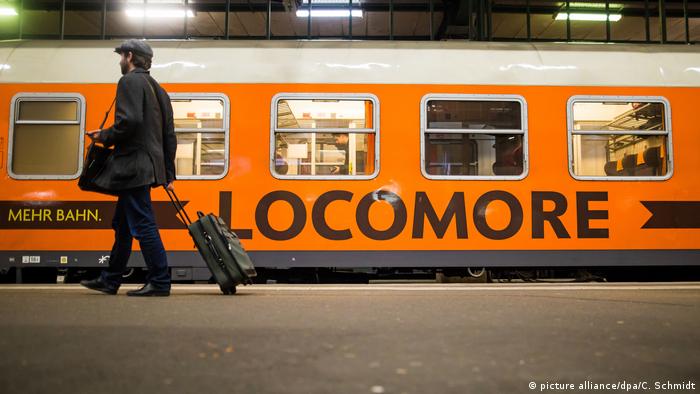 Locomore's orange, refurbished train from the 1970s left that station in Stuttgart at 6:21 a.m. (0521 UTC) Wednesday on a six-and-a-half hour journey to the German capital.

The train stopped at the German cities of Frankfurt and Hannover before arriving in Berlin's main station five minutes early, according to a tweet from Mark Smith, the author of the train travel website "The Man in Seat 61."

The Berlin-based startup, however, is little more than a pinprick in the side of Germany's state rail company Deutsche Bahn which has a market share of 99 percent on long-distance train travel. The state firm has more competitors on the regional rail networks.

With currently only one return service a day compared to Deutsche Bahn's 700 long-distance journeys per day, Locomore founder Derek Ladewig knows he's far from being considered competition - but it's a start.

"We are offering a new service to compete with the car, the plane, the long-distance bus as well as Deutsche Bahn," Ladewig told the AFP news agency. He hopes the train will also deter customers from using less environmentally friendly forms of transportation.

Locomore received its seed money from online supporters who chipped in at total of over 600,000 euros ($640,000) in over one year.

In the future, Locomore plans to expand its service to include Munich and Cologne.

Besides the cheaper prices, Locomore's "Social Seating" arrangement gives passengers the opportunity to choose their seats according to themed interests.

Germany's rail sector was liberalized in 1994 but it remains dominated by Deutsche Bahn which carries more than 5.5 million passengers a day in Germany.

German rail company Deutsche Bahn has said it will begin outfitting employees with body cameras. The trials are in response to a spike in violence against rail staff, which rose significantly in 2016. (10.07.2016)

The German rail operator booked a heavy loss for 2015 despite record turnover. Problems in its cargo unit, a protracted train drivers' strike and restructuring efforts affected the bottom line. (16.03.2016)