Finance Minister Olaf Scholz says Germany will have to say goodbye to the tax revenue windfalls it has been accustomed to. International and domestic problems are acting as a drag on Germany's economic growth. 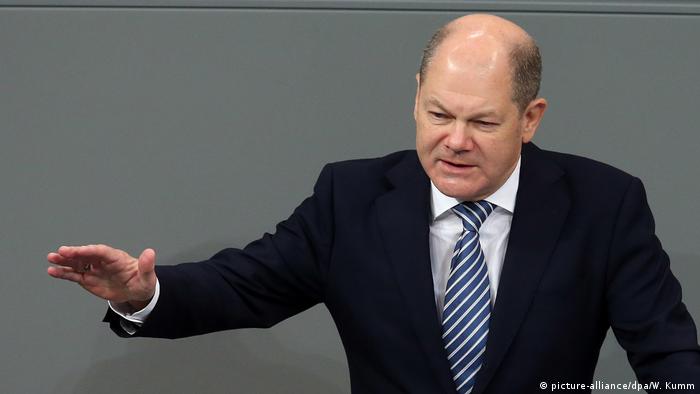 Germany's "fat years" of higher-than-expected revenue from tax receipts are over, Finance Minister Olaf Scholz warned on Sunday, signaling that Europe's top economy is set to lose momentum in the next few years.

"The good times in which the state kept taking in more taxes than expected are coming to an end," Scholz told the Bild am Sonntag newspaper. That, he said, restricted the government's capacity for passing new tax cuts or increasing public investment.

The German government has spent less than it has received in tax revenues in every fiscal year since 2014 as a result of strong economic growth, high wages and record-low unemployment.

Scholz, a Social Democrat (SPD), cited the predicted fall in tax revenue as a reason for why he opposed abolishing the "Solidarity Surcharge," a controversial tax designed to help finance development projects in eastern states that were part of communist East Germany.

The SPD's coalition partners, the conservative Christian Democratic Union (CDU) and its Bavarian sister party, the Christian Social Union (CSU), have called for ending the surcharge by 2021.

Germany's economic outlook appears fragile after the economy contracted for the first time in more than three years in the third quarter of 2018. In response, the government cut its growth forecast for 2018 to 1.5-1.6 percent, down from the 2.2 percent expansion registered for 2017.

Ongoing trade tensions between the United States and China, problems in the German car industry and uncertainty about the United Kingdom's planned exit from the European Union have all contributed to the slow down.

That policy has angered Germany's European peers and some international organizations, which have called on Berlin to increase public investment to help rectify the country's massive trade surplus with the rest of the world.

More than six months into 2018, Germany passed its budget for the current year, pledging more money for the army, police, and migrant officials. The government may be new, but its principle stays the same – no new loans. (06.07.2018)

The home of Germany's finance minister in Hamburg was splattered with black paint and had tires set alight in front of it. Had a police patrol not happened to pass by, the damage cold have been much worse. (30.11.2018)

Britain and the European Union are frantically trying to agree on how to avoid a chaotic breakup in March. Germany's finance minister has said Berlin is prepared for the worst possible outcome. (23.11.2018)

Germany's huge surpluses in global trade are not only part of US President Donald Trump's sharp rhetoric in his campaign against this country's exports. Now, even the IMF sees them as a reason for current trade tensions. (06.08.2018)