Germany′s Coalition Agrees on Radical Expansion of Nurseries | Asia| An in-depth look at news from across the continent | DW | 17.05.2007

Chancellor Angela Merkel's grand coalition has approved a tripling of nursery school facilities that would guarantee every family a place in the state day care system by 2013. Minimum wage issues remain unresolved. 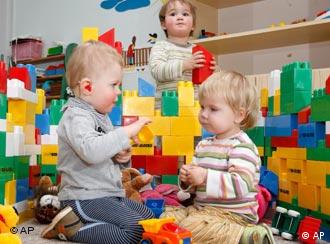 During a cabinet meeting late Monday night, leaders of the centre-right Christian Democratic Union (CDU) and the centre-left Social Democrats (SPD) ended months of disagreement and agreed to create new child care provisions, part of a bid to catch up with other European countries on family politics and encourage mothers to work and reverse a declining birth-rate.

Coalition leaders punctuated the talks with the "breakthrough" on child care, according to SPD head Kurt Beck.

Christian Social Union, the CDU's Bavarian sister party, leader Edmund Stoiber emphasised that the panel also agreed on payments of 150 euros a month to families for raising children at home.

"It is a sustainable compromise," Stoiber added.

Last month, German states endorsed the plan that was adopted Monday night, which calls for tripling the number of day care places for children under age three to 750,000 by 2013.

The move was championed by von der Leyen, a mother of seven who has stirred the ire of conservatives who see the provisions for child care as a break with traditional family values.

Von der Leyen's proposal foresees the federal government covering one-third of the total 12 billion euros ($16.2 billion) in costs for expanding day care spaces for kids, but it is still unclear how federal, state and municipal governments plan to fund the expenses.

At present, Germany lags behind its European neighbours in providing day care. Figures released by the government show 13.5 percent of children under three attend nursery schools, compared with the European average of 35 percent.

The coalition was unable to settle the divisive issue of implementing a minimum wage, with both Beck and Stoiber confirming that subject is still unresolved.

Labor unions want a minimum hourly wage of 7.50 euros to protect German workers from being undercut by cheap foreign labor, but Merkel's CDU says a new minimum wage would lead to job losses.

The CDU and SPD, however, did agree on easing the burden on low-income earners. Those who earn between 800 euros and 1300 euros and also draw on social welfare benefits will no longer have to make social insurance contributions.

According to the Federal Labor Agency, around half a million people in Germany earn so little, that they must supplement their income with social welfare.