Germany′s Christian churches in meltdown | Germany | News and in-depth reporting from Berlin and beyond | DW | 30.03.2021 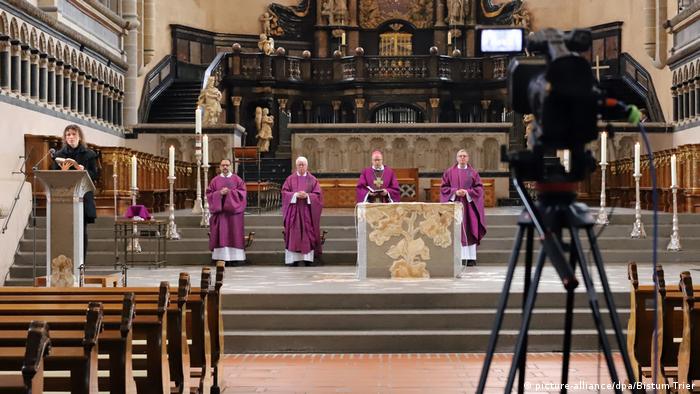 As it was last year, Easter Mass in the city of Trier will be transmitted live on the internet

Easter is the most important festival on the Christian calendar. Traditionally, churches across Germany and in many other countries would be full of worshippers, many of whom might only otherwise set foot in a church once or twice a year.

For the second year in a row, Easter is occurring during the pandemic, which means a different sort of observation in Germany's 14,000 Protestant and almost 10,000 Catholic parishes.

In a "normal year" nearly all of them would celebrate Easter, marking the resurrection of Jesus. There would be Easter fires in front of churches. And inside, worshippers would gather in hearty song.

For now, though, the fires are not permitted and only a small number of the usual congregation are allowed to take a seat on church pews. Also, there is no more singing due to the danger of aerosol transmission of the virus. The joy and jubilation that are normally such a feature of Easter festivities must this year be expressed in quietly-spoken words.

Just a week ago, Heinrich Bedford-Strohm, the head of Germany's Lutheran Church, stated during a digital press conference that there is "no reason" to doubt the significance of services. "The hygiene concepts drawn up by the churches have been shown to function," he said.

A short while later, Chancellor Angela Merkel and the premiers of Germany's 16 federal states emerged from another of their regular meetings on efforts to contain the pandemic. The key development: Germany should effectively close down over the Easter holiday. "Days of rest," was the chancellor's chosen wording. A strict stay-at-home policy — including staying away from church services — was to be enforced. Merkel had, it seemed, sidelined the churches and they were not happy.

"Easter is the most important festival for us, and church services are no mere embellishment," Bishop Georg Bätzing, the chairman of the German Bishops' Conference, wrote on Twitter.

When Merkel apologized for the "days of rest," the churches again began planning for regular services where possible, as well as livestreams.

Meerkel's decision not to inform the church of the government's plans in advance made the quarrel over Easter worship all the more acrimonious. One thing is for sure: the churches are valuable partners in efforts to create a fair and open society. They are responsible for thousands of welfare facilities such as daycare centers for young children, retirement homes, hospitals, counseling centers, and so on. Just as sure, however: their relevance in German society is diminishing.

The majority that once was

In 2019 there were still 45.75 million Christians in Germany: 22.6 million Catholics, 20.7 million Protestants and 2 million members of the Orthodox Church — combining for about 52% of the population.

In 1991 — the period after the fall of the Berlin Wall — 71% of people in Germany still belonged to a church. In 1980, that number was just over 85.7% of the people in what was then West Germany. Today though, the number of Christian worshippers is constantly falling. It looks likely that at some time this year or next the point will be reached where fewer than half of all Germans will belong to a church.

Church and state are formally separate institutions in Germany, but they have traditionally been close partners, with the government bolstering the role of the churches. For more than a century, for instance, they have been able to collect a so-called church tax from their members. Indeed, it is the state that does the collecting, charging a special fee for doing so. In a country where the bureaucracy has tended to be so efficient, the authorities know very well who is a member of which church and how much church tax they have to pay.

The downward spiral in church numbers is, in many ways, a natural development. Many older people who pass away were still officially members of one of the churches. At the same time, however, only a small proportion of new births are baptized in Christian ceremonies.

But there are other factors contributing to the relentless downward trend. People facing economic hardship, for instance, make significant savings by leaving the church. And many, including fervent believers, are turning their backs on churches that they feel have let them down. Few people have forgotten the lavish spending of the former Catholic bishop of the western diocese of Limburg. The opulence was so shocking that Franz-Peter Tebartz-van Elst became known as the "Bling Bishop." And it was not just the financial excesses that were so widely publicized, but also his authoritarian style of church leadership.

And the faith of even the most pious and loyal worshippers has been painfully tested by countless cases of sexual violence against minors by members of the clergy.

A decade ago, a sexual abuse scandal in all its shocking dimensions began to take hold in church institutions and public debate. Thousands of minors were subjected to sexual abuse at the hands of priests and other members of the church.

This scandal has shown no sign of going away. The abuse has manifested itself not only in the Catholic Church, but also in families, in sport, in the Protestant churches, whereby victims of abuse within the Protestant church often say that the Catholic authorities have gone further in probing structures of abuse and supporting victims than authorities within their own church.

The fact remains, however, that the Catholic Church has a tradition of controlling people's sexuality.

What is more, for more than half a century, it has stuck by the dogma that all sexuality within marriage must have procreation as its chief purpose. In 1968, Rome banned the birth control pill. Homosexuality was dammed.

Faith in the church was destroyed. A church that no longer spoke the language of ordinary people.

The number of people leaving the churches reached an all-time high in 2019. And, as was the case in 2010 — when the sexual abuse scandal involving clergy in Catholic schools first broke — the number of men and women turning their backs on the Catholic Church rose far more rapidly than the number leaving the Protestant church.

Few observers believe that any of the people who have left will reconsider and come back. "Those who give up their link with the church will, in all likelihood, lose their faith in general," says Detlef Pollack, a prominent specialist in the sociology of religion.

Like any other global business determined to defend its brand, the Vatican has for years kept a close and critical eye on the German branch of the Catholic Church and its push for reform. The country is still considered a troublemaker for the Vatican — five centuries after the Reformation.

Many churches will be close to empty this Ester. In the past 12 months, one question has repeatedly been asked: How could God allow such suffering and the loss of so many lives in the pandemic? But many of the priests and pastors who address that very question will be doing so via livestream transmission, and not in front of a real congregation.

Faith and religion are nurtured in the mutual solidarity of a shared community, Pollack said. And many people in Germany fear that the two official Christian churches will stand for something very different after the pandemic than they did before.