Development Minister Gerd Müller has said the new initiative guarantees a responsible supply chain. But critics say it is too weak to make a difference. 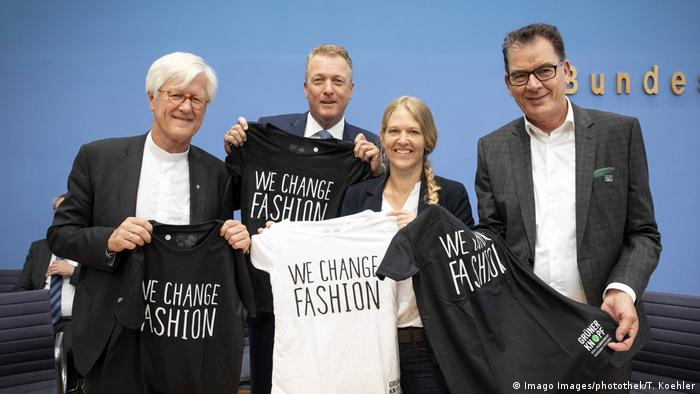 German Development Minister Gerd Müller (above right) presented the country's new "Green Button" seal for sustainable textiles on Monday. The new scheme is meant to ensure that consumers can purchase clothing that has achieved certain social and environmental standards, including a minimum wage for textile workers and a ban on child labor, as well as the use of certain chemicals and air pollutants.

"Everyone said that there was no way you could certify an entire supply chain right up into the storefront," Muller told the Augsburger Allgemeine newspaper. "But we have shown that is indeed possible with the example of textiles."

Müller has said that he was inspired to ensure the social responsibility and safety of the clothing industry after being moved by the 2013 Rana Plaza disaster in Bangladesh. About 1,130 people were killed and 2,5000 injured when a garment factory collapsed in the capital Dhaka, affecting workers who made clothes for major chains like Benetton, Primark, Walmart, and Mango.

The seal has already been applied to products from some smaller German brands, but also large chains like Lidl and Tchibo.

Textile industry in Europe: Fair Fashion – Made in the EU!

However, the new scheme has been heavily criticized by the textile industry, which says it is superfluous and has created duplicate structures to those that already exist. They also pointed out that if only Germany was taking part, it wouldn't make any real difference in a globalized sector.

"The initiative is good, but the implentation is not," said Uwe Wötzel of the "Clean Clothes Campaign."

Wötzel told the news organization RedaktionsNetwerk Deutschland that "the criteria are simply too weak" to make a difference with regards to sustainability and ensuring that textile workers are employed in fair and safe conditions. For example, he said, the minimum wage laid out in the framework is "so low that no one could live off it."

Germany's office for consumer protection said that they would have to wait and see what effects, if any, the seal had on the clothing industry in the country.

Fast fashion and the flood of used clothes

A German court has rejected a lawsuit from Pakistanis against German retailer KiK over responsibility for a factory fire in Karachi. KiK said the blaze was an act of terrorism. Shamil Shams reports from Dortmund. (10.01.2019)