Germany to revive climate change, phase out glyphosate | Germany| News and in-depth reporting from Berlin and beyond | DW | 23.03.2018

New German Environment Minister Svenja Schulze from the Social Democrats is still largely unknown. In her first major speech in parliament, she has promised to at least aim to meet climate change targets by 2030. 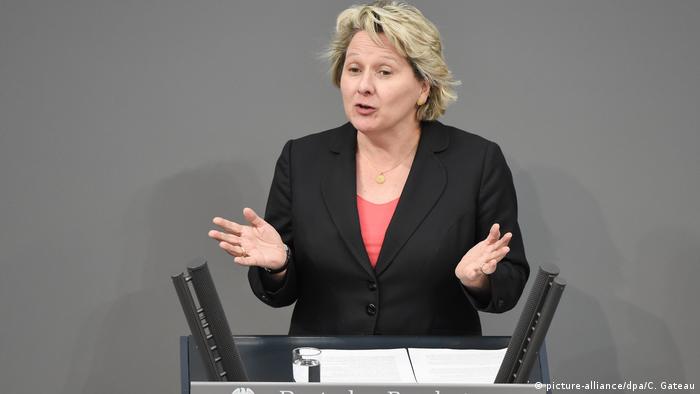 Svenja who? That's the question on many people's lips when she was tapped as the new environment minister. In fact, 49-year-old politician Svenja Schulze was previously known primarily in her home state of North Rhine-Westphalia, where she used to be science minister.

Now, for the first time, she has taken the speaker's podium at the Bundestag, full of praise for Germany's efforts at environmental protection. Her speech described a continuing, decades-long success story.

And indeed, Germany is a driving force behind the transition to green energy, building solar and wind power plants. And it is the world's leader in waste sorting. Chancellor Angela Merkel was even celebrated internationally as the "climate chancellor."

But in recent years, the country that once spearheaded environmental and climate protection has seen its track record dented. Greenhouse gas emissions have risen again because there are still too many coal-fired power plants, especially in Schulze's home state of North Rhine-Westphalia.

Germany will barely be able to achieve its goal of reducing greenhouse gases by 40 percent by 2020 - somewhat embarrassing for the former trailblazer in environmental protection.

Read more: Climate scientists should cut back on air travel

"It is true, and this coalition has openly admitted that there is a gap in our ability to reach our 2020 climate protection goals that cannot yet be closed, despite the efforts made in recent years," Schulze admitted.

Let's phase out fossil fuel, but when?

Schulze now wants to convene a special commission to clarify when Germany will be able to phase out fossil fuel power stations. For many critics her plan is not ambitious or fast enough, because no fixed date has been set.

But Schulze has said quite openly that she is also keeping an eye out for the workers who still work in the coal industry. She also said she will always have to consider the social impact of any environmental policies. Next year, the new minister plans to present a climate protection law, which will make the goal of saving 55 percent of greenhouse gases by 2030 legally binding.

'I'm not a fan of driving bans'

And then there is the ongoing diesel scandal. And part of this is the danger that millions of drivers will be threatened with driving bans because the safe thresholds for nitrogen oxides have been exceeded in many cities. "I am certainly not a fan of driving bans. But I also know that we are going to need some innovative solutions if we want to prevent them," Schulze says.

"The perpetrators are not the motorists who bought cars in good faith, believing that they were environmentally friendly. The perpetrators are the car manufacturers." They will soon have to carry out, and pay for, extensive retrofittings, she said. With this, it would seem that the first conflict is looming with the new transport minister, Andreas Scheuer from the Christian Social Union (CSU).

Glyphosate to be phased out

Schulze also had, at the ready, a small declaration of war on the new and old coalition partners from the Christian Democrats and Christian Social Union (CDU/CSU). At the end of last year, former agriculture minister Christian Schmidt sparked a heated dispute with the Environment Ministry. Without consulting the then-Environment Minister Barbara Hendricks, he voted in favor of continuing to authorize the highly controversial pesticide glyphosate in the European Union.

Read more: Glyphosate: the key points in an endless debate

Schulze does not want a repeat of this. "My hope is that this was a one-off gaffe and that we can assume that there is a new spirit prevailing in the current German government and that such foul play will not happen again." Schulze announced that the use of glyphosate will be stopped as soon as possible.

Schulze rather surprisingly took over the office of environment minister from her party colleague Barbara Hendricks. Karsten Hilse, member of parliament for the right-wing populist "Alternative für Deutschland" (AfD), wasted no time in making it clear to the new minister what she can expect to deal with in the Bundestag.

For him, the greenhouse effect is simply a lie. The other parties want to give Svenja Schulze time to set her own course of action. But according to Judith Skudelny from the Free Democrats (FDP), only 3 percent of the coalition agreement was devoted to environmental protection. This will certainly be one of the new Minister's most important tasks - to attract more attention to environmental and climate protection in Germany.

Researchers say a new discovery may help to create pesticides that don't kill bees. But critics say we need to move away from a 'chemical mindset' altogether. (22.03.2018)