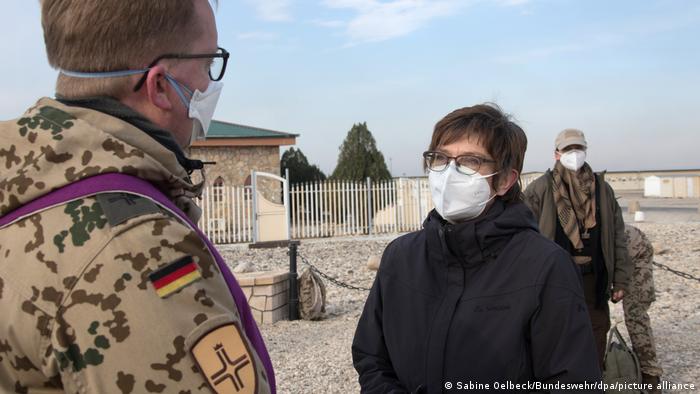 There are currently some 300 people employed by the German armed forces in Afghanistan, according to DPA

German Defense Minister Annegret Kramp-Karrenbauer wants the country to take in Afghan nationals who helped the German military during the war in Afghanistan, she told the German news agency DPA in remarks published Sunday.

Her comments come as NATO and the United States announced the withdrawal of their troops from Afghanistan this year, prompting fears that some Afghans could now be in danger after helping foreign forces.

German troops are deployed to the country as part of NATO's Resolute Support mission to train the Afghan National Defence forces.

How could Germany help?

According to the Defense Ministry, 781 people have been approved for residency since 2013.

Kramp-Karrenbauer wants the existing process to be streamlined and accelerated, the news agency said.

The Welt am Sonntag newspaper, citing the Interior Ministry, reported that Germany plans to set up an office in Kabul and probably also one in Mazar-e-Sharif in northern Afghanistan to help process cases.

"We are talking about people here who have worked alongside us, even at the risk of their own safety, for years in some cases, and have also fought alongside us and made their personal contribution," Kramp-Karrenbauer was quoted as saying by DPA.

"I feel it is a deep obligation of the Federal Republic of Germany not to leave these people behind without protection now that we are finally leaving the country."

Kramp-Karrenbauer added that helping local personnel was also an obligation of all international forces in Afghanistan to ensure the safety of the Afghan staff.

They fear that the Islamist Taliban would seize more power in the country. While Western powers are aware of the potential chaos that looms over post-withdrawal Afghanistan, they have pledged to support the people.

The Taliban has already been vocal with threats over the withdrawal announcement.

They want foreign troops to pull out by May 1 as per agreement with former US President Donald Trump.

Thomas Silberhorn, a member of the Bundestag and Parliamentary State Secretary at Germany's Ministry of Defense, recently told DW that NATO has done a "brilliant job" on preparing Afghan forces to secure the country by themselves.

Germany is set to pull out its NATO's Resolute Support mission by mid-August and the US by September 11.

There are currently around 10,000 NATO troops in Afghanistan, including nearly 1,100 Germans.