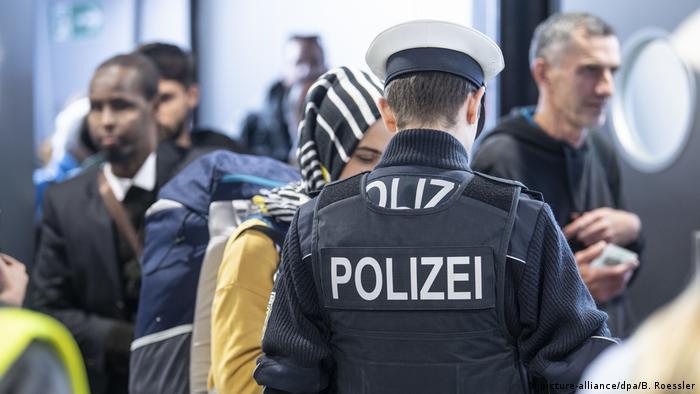 In a bid to fill thousands of new positions this year, Germany's federal police (Bundespolizei) has lowered requirements for recruits, according to a media report published Monday.

The newspapers of the Funke Media Group reported on the changes, noting that physical fitness requirements as well as the language level in exams have been changed.

The German-language portion of the exam currently consists of a 180-word dictation, according to the report.

For recruits looking to join the "middle-level" of police service, authorities have also "slightly raised" the number of mistakes they are allowed to make in the test in order to still secure a passing grade.

Police recruits in this level could go on to provide security at demonstrations or patrol airports and train stations as well as customs checks on Germany's borders.

The changes to the grading of the language exam were made "in order to allow a larger applicant pool to continue to participate in the subsequent parts of the exam," authorities said.

By lowering the language standards for the federal police exam, German authorities hope to appeal to other EU-citizens, the report noted.

The physical fitness portion of the test has also been changed to replace standing long-jumps and push-ups with shuttle runs. They've also scrapped height requirements for men and women who apply.

Jörg Radek, the deputy head of police union GdP, told the Funke Media Group that the federal police have had to "adapt to the societal changes of young people with relation to the mental and physical requirements for the police profession."

Germany's federal police are under pressure to fill 2,150 additional positions this year and to appeal to young applicants. Over the course of 2020, some 853 police officers will also retire.

Claims that German federal police use racial profiling have been denied by a conservative deputy to the interior minister. This follows a Münster court censure of officers for stopping a man because of his dark skin. (10.08.2018)

The number of police officers escorting deported migrants from Germany has risen sharply over the past four years. Security staff are feeling the strain over safety concerns and distant destinations. (14.12.2019)

German federal police have now given the all-clear after temporarily halting all departing flights and clearing the security checkpoint at Hamburg Airport.