It is a truth universally acknowledged that sweatpants are comfortable — whether they should be worn outside of the gym is less clear. One Stuttgart cafe has taken a stand and banned customers wearing the stretchy pants. 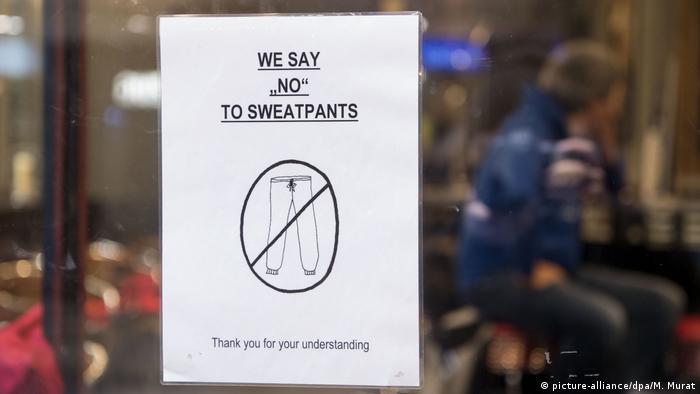 Customers with a more relaxed style might need to reconsider their choice of pants next time they go out for lunch or a coffee in Stuttgart after a local cafe asked patrons not to wear sweatpants, German media reported on Thursday.

A sign posted on the door of the Le Theatre cafe in the southwestern German city depicts a picture of sweatpants crossed-out, accompanied by the words: "We say 'No' to Sweatpants."

In a smaller font underneath, the sign reads: "Thank you for your understanding."

As the sign was written entirely in English, the campaign to bar the stretchy article of clothing from the cafe could be directed at tourists — particularly those from the United States, who are known to frequently opt for comfortable pants and footwear.

"There is a tendency in fashion for everything to be a little more comfortable," cafe owner Stefan Gauss told news agency DPA, who first reported on the story. "Many customers confuse that to mean they can come to a cafe in sweatpants."

Within hours of the story being published, a flurry of one-star reviews began appearing on Le Theatre's Facebook page.

The page's previous row of four or five-star reviews praising the service and food were replaced with sweatpants-defenders, who implored others not to visit the establishment, citing media reports on the sweatpants ban.

"Will never visit again, at most [wearing] sweatpants," wrote one user.

Gauss has promised to enforce the new rule gently, saying that if someone shows up in sweatpants he will kindly ask them to wear different pants "next time."

"If it looks stylish, that's something different," Gauss added.

France is restricting visitors from and to Britain amid rising cases of the omicron variant in the United Kingdom. Meanwhile, Indonesia has reported its first case of the variant.

Despite seizing dozens of weapons in 2019 raids, German prosecutors were unable to definitively prove the group related to the Ku Klux Klan intended to commit crimes.