Police have upped security around several day care centers in Munich after they received letters threatening the lives of students. The letters, some of which included swastikas, targeted Muslim and Jewish children. 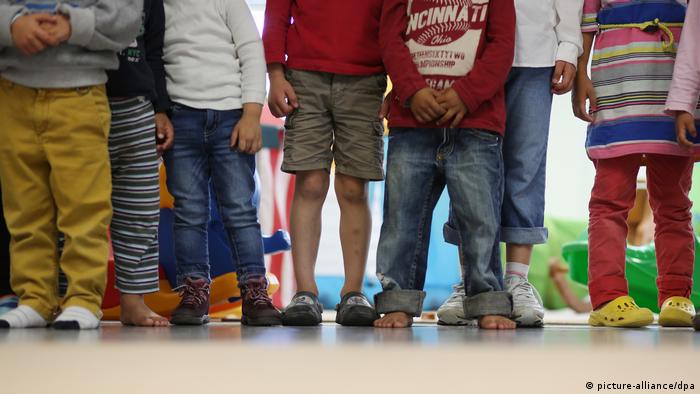 Parents in the southern German city of Munich were alarmed this week after it emerged that numerous day care centers had been sent letters threatening their children.

A total of 16 preschools and day care centers in southern area of the city were sent letters, some of which bore swastikas, that contained racist and anti-Semitic threats against children, Munich police said.

Children with immigrant backgrounds were described as "biological waste" and "filth from the Middle East" that one should "either deport or shoot."

The head of one day care told German newspaper Die Welt, that the letter called for all Muslim and Jewish children as well as those with migrant backgrounds to be sent away from the day care.

If the demand was not met, the letter's author threatened to carry out a truck attack at the day care or they would give the children poisoned candy.

The State Protection Office within the Munich police department, which handles politically motivated crimes, are currently investigating 31 similar letters that have been sent to authorities, lawyers, church organizations, and a local newspaper, as well as the day care centers since February.

The severity and frequency of the threats on the day care centers led officials to increase patrols this week to calm concerned parents and to monitor the situation.

Authorities said that based on the content and similarities of the letters, they believe they were written by the same person. Police added in a statement on Monday there are no indications that the threats will be carried out, but they are investigating the case seriously.

Local and state government officials have also said they're taking the threats seriously, expressing concern over the disturbing threats against children.

"We cannot stand by and idly watch as criminals threaten and endanger our children," Bavaria's anti-Semitism commissioner Ludwig Spaenle said.

A new study has found that the Ruhr Valley, once a pillar of integration, is witnessing a growth of intolerance. Researchers found a startling correlation between increased mistrust and the success of the far-right AfD. (15.03.2018)

The impending verdict in Germany's notorious NSU murder trial will not end the work of lawyer Mehmet Daimagüler. The son of Turkish immigrants fights racism in Germany, which he says is "socially acceptable."  (10.07.2018)

How much parents in Germany pay for day care varies wildly depending on where they live, a study has found. Though low-income families are impacted the most, researchers are skeptical of plans to scrap fees altogether. (28.05.2018)

After the Hungarian parliament passed new anti-LGBTQ legislation this week, Munich councilors have put forward a motion to light up the city's football arena in rainbow colors for Germany's match against Hungary.