Around 120 people are thought to be infected at the block of apartments in the city of Göttingen. Angry at being kept inside, residents threw stones, tires and a computer, before being forced back with tear gas. 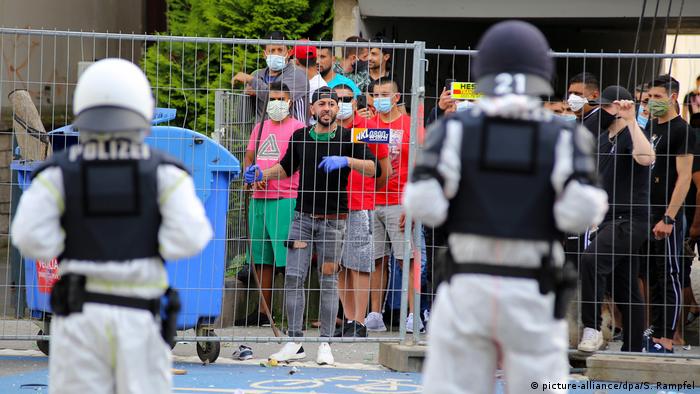 Clashes broke out on Saturday between police and residents of a housing complex in the central German city of Göttingen, leaving several officers injured, local police said.

Around 120 people from the large block of flats are thought to be infected with the novel coronavirus, prompting officials on Thursday to order all 700 residents into a fresh localized lockdown.

The disturbances broke out around midday on Saturday, according to the spokesperson for the police in the state of Lower Saxony. 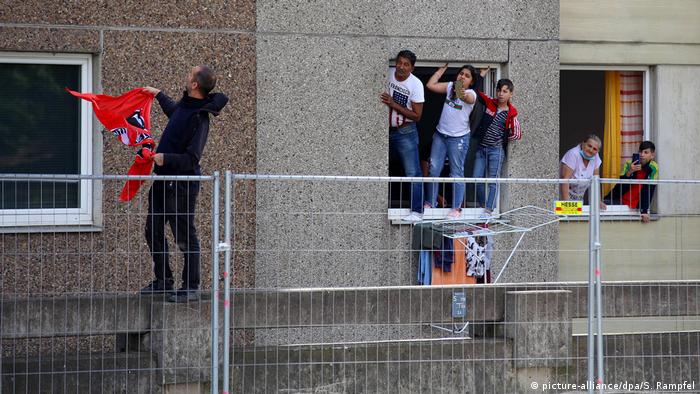 Some residents stood on window ledges and watched the scene unfold

The official added that angry residents threw stones, tires and a computer at police out of windows of the complex. They also set objects on fire.

Several residents then attempted to break down the fence that had been erected by city authorities.

Police used tear gas to force back the angry residents, according to the Hessische Niedersächsische Allgemeine (HNA) newspaper, citing eyewitnesses.

A blank was also fired from a pistol inside the complex, known as Groner Landstrasse, according to HNA.

The entire complex has now been ordered to remain in lockdown until June 25.

City officials stipulated that the residents must remain inside to prevent further spread of the virus. The decision has been denounced by politicians and residents because of the state of the run-down complex.

More than 200 children and teenagers are housed in precarious conditions there, reported the news agency dpa, citing Göttingen authorities.

The city began follow-up testing on Saturday afternoon of residents who initially tested negative for the virus, according to a city representative.

The outbreak is one of several to hit large German housing complexes.

DW reported on a virus cluster that broke out in May in the Iduna housing complex, also located outside Göttingen's city center – just over a kilometer from the latest outbreak.

Officials in northwestern Germany insist the wider community is not yet at risk. But they complain that they've lost trust in the country's largest meat processing firm over delays in providing staff contact details. (20.06.2020)

As countries gradually ease lockdown restrictions, people craving for an excursion are heading to nearby holiday homes. Go-local is the new mantra among holidaymakers seeking both safety from the coronavirus and privacy. (19.06.2020)

The EU is facing its biggest challenge in history, Angela Merkel has told German lawmakers. The coronavirus pandemic has shown the bloc's fragility she said, as Germany prepares to assume the rotating presidency. (18.06.2020)