Germany prepares for Ukrainian refugee influx | Germany | News and in-depth reporting from Berlin and beyond | DW | 25.02.2022 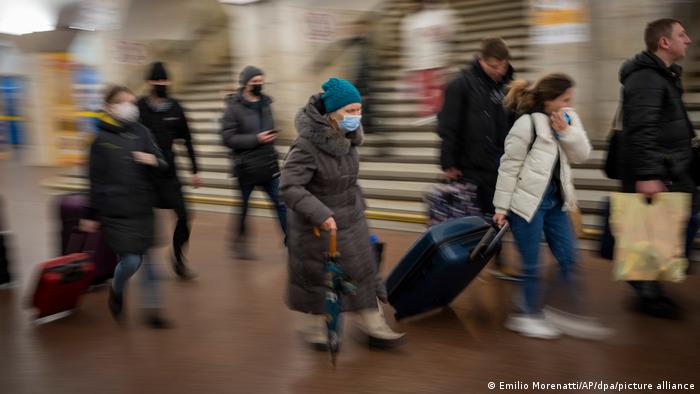 People have started to try to leave Kyiv

Ukraine is just two hours away from Germany by plane, only about 1,300 kilometers (810 miles). Experts assume that hundreds of thousands — possibly millions — of people will flee the country. Thousands have already begun to do so. The United Nations Refugee Agency (UNHCR) estimated Friday that 100,000 people have left their homes inside Ukraine.

"We are very vigilant and prepared for all possible scenarios," said German Interior Minister Nancy Faeser on Monday earlier this week, days before the Russian invasion of Ukraine on Thursday. "We are preparing first and foremost to support Ukraine's neighboring countries. That is the first scenario."

"We will provide massive support to the affected states, especially our neighbor Poland, should there be large-scale flight movements," she added on Thursday.

Ukrainian refugees 'will be a political challenge for Europe': DW's Richard Walker

But preparing to help Ukraine's immediate neighbors to deal with the influx will probably not be enough, migration researcher Gerald Knaus told DW.

"The flight movements will certainly not remain a problem only for the neighboring states, because Ukrainians have the right to visa-free entry to the EU, where they can then move around freely," he said. "So they can come to the EU without applying for asylum. And they can legally travel to any European country."

Forty-four million people live in Ukraine. According to United Nations estimates, based on experience after Russia's annexation of Crimea in 2014, many experts expect most refugees to initially seek shelter in the western part of Ukraine.

After that, Ukraine's western neighbors, especially Poland, will probably be the main goal of refugees. About 1 million Ukrainians already live in Poland, and there are many ties of kinship and friendship between the two populations. Germany has already promised Poland humanitarian aid, but countries such as Moldova, Romania, and Slovakia could also become destinations for refugees.

In Germany, the refugee organization Pro Asyl has called on the eastern EU states not to close their borders to Ukrainian refugees: "This must also apply to the thousands of transit refugees who have already fled to Ukraine from other conflicts. Among them are people from Syria, Afghanistan, Chechnya, and Somalia," a press statement said, before adding that Ukrainian citizens' right to enter the EU without a visa, which has existed since 2017, has never been more important.

Karl Kopp of Pro Asyl told DW, "In Germany, too, we have to reckon with everything because we have a completely new situation. It could be a few thousand but also a few million people who come here."

Ukrainians in Berlin concerned about family and friends back home

There are around 130,000 people with Ukrainian roots living in Germany who could now try to bring family members or friends to join them.

"We can do this! Germany has a functioning reception system for refugees and is able to create capacity for accommodation in the division of labor between the federal and state governments," said Kopp.

But he is skeptical about the number of refugees Germany can expect. He remembers his experience after the Russian annexation of Crimea in 2014: "Within a few months the number of internal refugees inside Ukraine rose to over a million people.But the number of asylum applications within the EU was only 20,000 in 2015 and then dropped to 10,000."

Several federal states have already promised quick and unbureaucratic help. Berlin Mayor Franziska Giffey said the capital was looking into providing emergency accommodation. And the state of Mecklenburg-Western Pomerania, which borders Poland, has stopped the repatriation of rejected asylum seekers to Ukraine.

Opinion: Ukraine will survive — but the West should be ashamed

The war has arrived. Russia has invaded Ukraine. If the West had not looked away in 2014, this catastrophe might have been averted, writes DW's Roman Goncharenko.