German politicians have called for explanations as to how an Iraqi man suspected of a girl's murder could leave the country unhindered. Many asked in particular how he managed to depart under a false name. 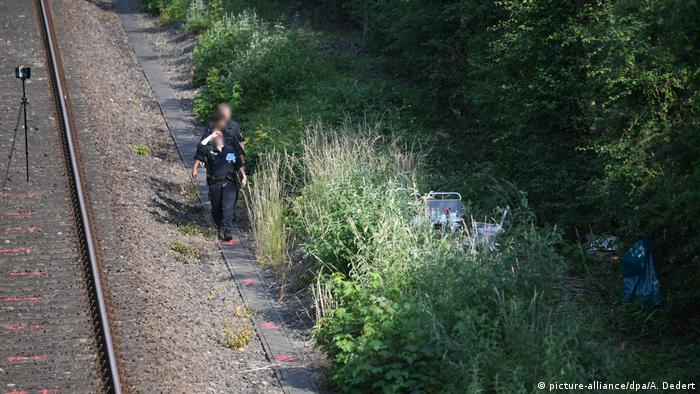 German politicians from across the political spectrum are calling for an investigation into how a 20-year-old Iraqi man suspected of raping and murdering a 14-year-old girl could have left the country without being stopped by police.

The suspect, Ali B., is thought by police to have flown last week with his family from the western German city of Düsseldorf to Iraq via Istanbul. The plane tickets were issued under different names than the ones registered at the refugee shelter in Wiesbaden where the family of eight was staying.

A 13-year-old refugee boy from the same shelter had told police that B. was the possible perpetrator of the rape and murder, but his information came after the suspect had left the country. Bashar had already come to the attention of the police on a number of occasions and was suspected of involvement in the rape of an 11-year-old girl.

Questions from all sides

Leading Social Democrat Carsten Schneider told the Bild newspaper on Friday that authorities had to "swiftly clarify how the suspect could elude and how he could quickly be brought to trial in Germany."

Speaking to the same paper, his party colleague Burkhard Lischka, the SPD's spokesman for internal affairs, said Interior Minister Horst Seehofer should "ensure that the existing control mechanisms for entries and departures are actually used." In this case, the "doubtful papers" held by the suspect and the destination of travel should have led the federal police to compare fingerprints and realize that " a criminal was on the run."

Armin Schuster, from Chancellor Angela Merkel's Christian Democratic Union (CDU), said the case raised the question of why the suspect, who was already known to police, had "not long since been placed in investigative custody." He told the Neue Osnabrücker Zeitung that prosecutors and courts had to "offensively exploit" their legal options.

The most radical demand, as expected, came from the anti-immigration Alternative for Germany (AfD) party, with the co-leader of its parliamentary party, Alice Weidel, calling for the government to step down over the affair.

In a video message posted to Twitter, Weidel said the death of girl, identified by German media only as Susanna, was "not a blind stroke of fate."

"Susanna is another victim of the hypocritical and egoistic [refugee policy] of Chancellor Angela Merkel," Weidel said.

The murder of Susanna, whose body was found on Wednesday after she had been missing since May 22, has reignited debate in Germany over the country's acceptance of more than a million refugees since 2015.

A number of high-profile crimes committed by asylum-seekers have hardened anti-immigration sentiment in several quarters and contributed to the entry of the AfD into the German parliament in 2017 elections.

A 35-year-old Turkish asylum-seeker arrested on Wednesday on suspicion of involvement in Susanna's murder was released again on Thursday without charge.

Editor's note: Deutsche Welle follows the German press code, which stresses the importance of protecting the privacy of suspected criminals or victims and obliges us to refrain from revealing full names in such cases. However, we are releasing the suspect's name and photo as part of an active manhunt .