An Iraqi refugee suspected of involvement in the killing of a 14-year-old girl has fled Germany, police said. A 35-year-old Turkish suspect had been arrested but was later released. 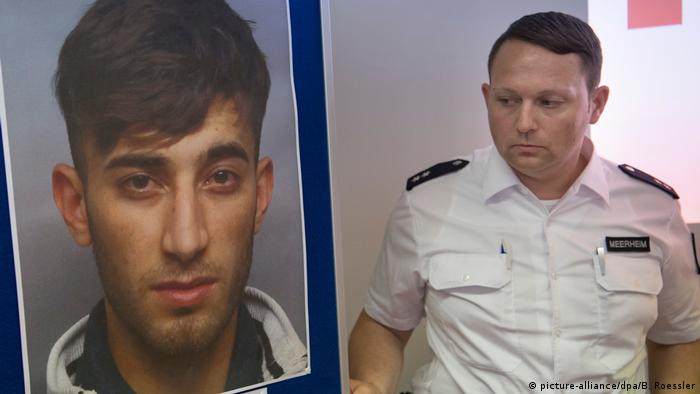 Police released this photo of the suspect, Ali Bashar (20), as part of their manhunt

A 20-year-old Iraqi refugee urgently wanted by police for questioning over the death of a 14-year-old girl from the German city of Mainz has left Germany, police said on Thursday.

They said the man had recently been living in a refugee shelter in the Erbenheim district of Wiesbaden, the city where the girl's body was found on Wednesday.

According to Stefan Müller, the head of the police for western Hesse, the man, identified as Ali Bashar, appeared to have left Germany several days ago in haste, together with his parents and five siblings. He said the suspect probably came to Germany in October 2015 via Turkey and Greece, along with a wave of other refugees.

The daily Frankfurter Allgemeine Zeitung said the man and his family had returned to Iraq to escape prosecution.

The man had been the girl's boyfriend, according to the Wiesbadener Tagblatt.

He had been a suspect in several other offenses in the area, including a robbery at knifepoint, according to police.

Police said another suspect in the case, an unnamed 35-year-old male Turkish asylum-seeker, had been arrested. He also lived in a home for asylum-seekers in Wiesbaden, they said.

However, the man was released Thursday evening. Senior Public Prosecutor Oliver Kuhn told reporters that authorities no longer had any grounds to suspect the Turkish national was complicit in the young girl's murder.

Police found the body of the girl buried among thick undergrowth near a single-track railway line. They said current indications were that the girl had been raped and then strangled to death.

Police were alerted after the victim, named in the media only as Susanna F., had not returned home from an outing on May 22 with friends to the inner city of Wiesbaden, situated some 17 kilometers (10.4 miles) from Mainz.

Police said that a 13-year-old refugee boy had told officers at a police station on Sunday that the Iraqi was a possible perpetrator in the rape and murder of the girl. The Turkish suspect was not previously known to police.

Local rabbi Aharon Ran Vernikovsky said told the Jüdische Allgemeine newspaper: "I am as dismayed, saddened and stunned as one can possibly be over Susanna's death." Mainz's entire Jewish community was mourning the death of its young member, he added.

In Berlin, the Central Council of Jews in Germany issued a statement saying, "Our deepest sympathies go to all her relatives and friends."

The council also said it expected authorities to provide "rapid and comprehensive" updates on the murder investigation as it became available, and to hand down "tough penalties" against those found guilty.

Editor's note: Deutsche Welle follows the German press code, which stresses the importance of protecting the privacy of suspected criminals or victims and obliges us to refrain from revealing full names in such cases. However, we are releasing the suspect's name and photo as part of an active manhunt.

The former president of the Central Council of Jews in Germany says Jewish life is only possible with police protection. She claims the threat comes from the center of German society and says the government needs to act. (29.12.2017)

Last December, a German teenager was murdered by her former boyfriend, an Afghan refugee. The small town of Kandel has seen its streets hijacked by heated demonstrations of Germany's competing attitudes about migration. (04.03.2018)