Opinion: Murder of German girl will have political consequences | Germany | News and in-depth reporting from Berlin and beyond | DW | 29.12.2017

The deadly stabbing of a young German girl will inevitably have repercussions for ongoing coalition talks in Berlin because the suspected perpetrator is a refugee. The debate can't be avoided, says DW's Marcel Fürstenau. 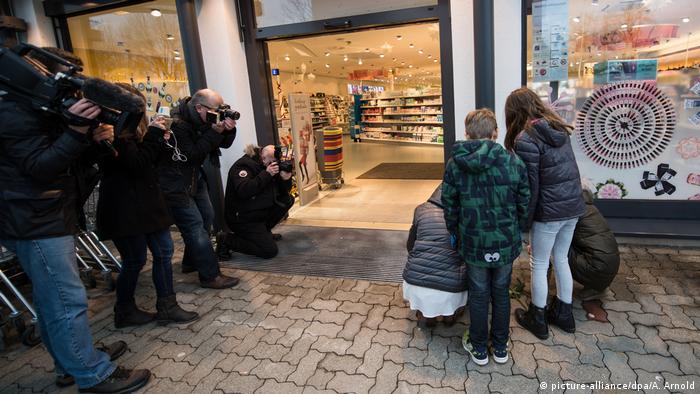 Given all the factors in this terrible crime, one thing seems impossible: that people, despite being understandably horrified and outraged, might deal with it calmly. The parents of the young girl from the small, peaceful town of Kandel in Rhineland-Palatinate are inconsolable. The crime is already incomprehensible, and becomes even more so when we are told that the presumed murderer was, for a while, practically a member of the family. "We took him in as if he were a son," the girl's father said, according to the Bild tabloid newspaper. He has lost his only daughter. She was stabbed and killed by her former boyfriend, an unaccompanied refugee from Afghanistan.

The accused states that he is as old – or rather, as young – as his victim: 15. According to Bild, the girl's father doesn't believe it. He says there's no way the boy is only 15, and, "we hope that now, in the course of the investigation, we'll find out his true age." This is crucial in order to determine whether, in legal terms, Abdul is old enough to be held fully criminally liable, as he would be if already legally an adult. However, if their mental and moral development is deemed to be the equivalent of a child's, adolescents are often judged according to milder criminal laws relating to young offenders.

The perpetrator's background and origins are relevant

It is already apparent that the Afghan, who came to Germany in 2016 from a country riven by civil war, cannot be considered a mature adult. Yet it is absolutely understandable that the girl's parents may hope he will be punished severely. There is a dimension to what they've been through, the suffering they are now experiencing, that goes far beyond other, similar tragedies. Their child fell for someone who came from a completely different culture and had fled from terrible hardship. The young refugee was motivated to kill the girl when she rejected his love. Affection turned into uncontrollable jealousy, culminating in murder.

As far as we are aware of the circumstances, the police are right to describe this as a "relationship crime." Nonetheless, other aspects cannot, and should not, be ignored. The perpetrator's background and origin must necessarily be considered when reporting on this crime, given that there has been massive immigration to Germany which, for a long time, was not properly controlled. However, context and tone are key. It was good to see Kandel's mayor, Volker Poss, issue a warning against xenophobia after the terrible incident in his town.

You can't lock people up on suspicion alone

He pointed out that the police had already got involved before the crime was committed. The victim's parents had reported the boy who subsequently murdered their daughter, accusing him of defamation, harassment and threatening behavior. The police spoke to the boy and warned him off. In fact, he was served with another summons the day of the murder. What was the alternative in this situation? Lock him up on suspicion that he might commit a crime? A minor, whom the police did not regard as a terrorist threat?

It was both predictable and unavoidable that reactions on social media would be especially virulent. However, politicians need to remain calm and resist the temptation to get caught up in the general mood, like the center-left Social Democratic Party's (SPD) spokesman on domestic affairs in the Bundestag, Burkhard Lischka. In an interview with the news network RedaktionsNetzwerk Deutschland, he called for the perpetrator to be deported, saying that this was "fundamentally possible" under German and international law. Perhaps this is true; but it won't bring the murdered young girl back to life, nor will it help to prevent such crimes in future.

"Criminality is not related to the passport someone has, but the stress factors they've been subjected to," the sociologist Dominic Kudlacek said, after this terrible murder. The deputy head of the Criminological Research Institute of Lower Saxony, he pointed out that young German men are also highly likely to be involved in crimes. Insights like these, however, are hardly new, and are sadly unlikely to help keep the debate objective.

And this is why the murder in Kandel is going to be an issue when the exploratory coalition talks between the conservatives and the SPD get round to the huge issue of refugees. After Burkhard Lischka, many others will also speak their minds. If they do it in a responsible way, this is all to the good. But please – don't inflame the situation unnecessarily!