Germany is on track to record the world's largest trade surplus for a third consecutive year. The country's $299 billion surplus is poised to attract criticism, however, both at home and internationally. 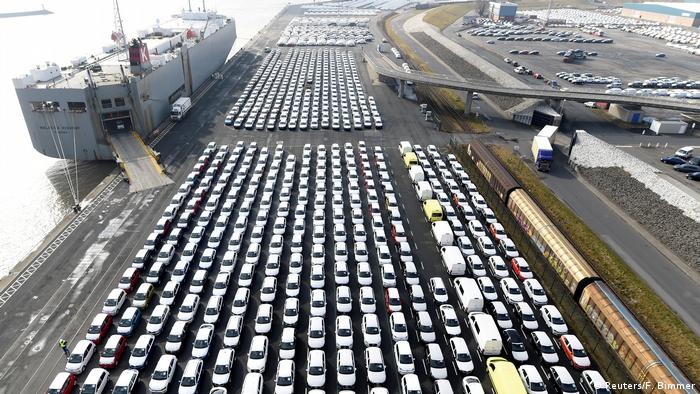 Germany is expected to set a €264 billion ($299 billion) trade surplus this year, far more than its closest export rivals Japan and the Netherlands, according to research published Monday by Munich-based economic research institute Ifo.

However, the latest surplus figures indicate a slight dip as a proportion of Germany's total economic performance compared to 2017, falling from 7.9 percent to 7.8 percent.

Ifo's report takes into account trade in goods, services and income from foreign assets. Trade in goods is the runaway driving factor behind Germany's surplus at over €200 billion, while income from assets is also expected to add up to around €63 billion. Germany is expected to run a €18 billion deficit in services, according to IFO.

The latest numbers reinforce Germany's dominant export strength in the world and are likely to spark criticism from other leading nations. The US in particular has chided Germany for its trade surplus, with President Donald Trump singling out the country as one of the main culprits responsible for America's $460 billion trade deficit.

Trump has also threatened to slap tariffs on foreign automobiles in the US, Germany's most important export item.

There has also been criticism back at home, with several groups demanding that the federal government use its current account surplus to spur consumer demand and stimulate investment. For example, trade unions have long been calling for a rise in wages.

"The fact is that we have an import deficit because consumers and investors in Germany are not asking enough questions," said Gustav Horn, director at Germany's IMK Institute.

However, a spokeswoman for Germany's Federal Ministry of the Economy insisted on Monday that achieving a high surplus was not a "political target" and that government policy could only have a limited influence. It was also Berlin's goal to lower the surplus by strengthening consumer demand, she added.

Volker Treier, chief foreign trade analyst at the German Chamber of Industry and Commerce (DIHK), said Germany's trade success was reason to celebrate and that the gains were going towards positive investments. "(The trade surplus) is an indicator of German companies' performance and the attractiveness of their products — and all this in a difficult international environment," he said.

"The complaint that Germany is flooding the world with its goods is only superficially true," Treier added, explaining that many German companies use their capital surplus to finance worldwide investments. German firms are estimated to employ a million people in China and more than 850,000 in the US.

Read more: German economy is responsible for 4.8 million jobs in the EU

Nevertheless, Germany's surplus still exceeds the 6 percent amount deemed by the European Union and International Monetary Fund as sustainable over the long term, given that one country's surplus is another's deficit and debt.

"Sustained high trade surpluses can become problematic if the receivables cannot be paid — for example if foreign countries are no longer able to meet the interest burden," Ifo expert Christian Grimme pointed out.

Nevertheless, Germany's neighbor the Netherlands actually boasts a far larger surplus as a proportion of total economic proportion, at 12 percent.

Elsewhere, China is expected to record the largest export numbers overall, but a rise in imports has seen its surplus fall in the first half of 2018.