A baby born into a lesbian family will have two mothers, and neither will be required to apply to adopt the child, according to a proposed reform. But that won't be the case for kids in families with two fathers. 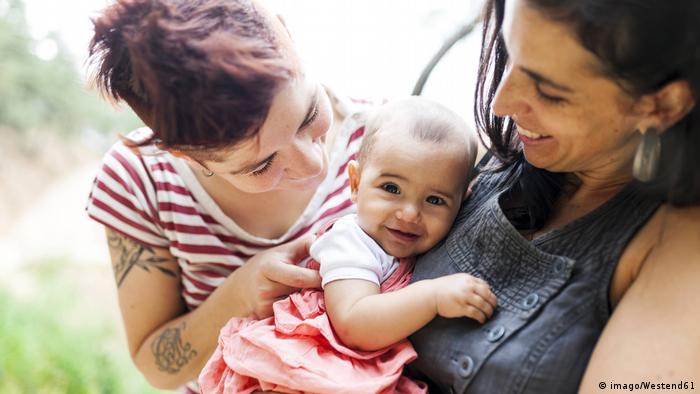 A German parentage law package close to being submitted to cabinet would give a child born into a lesbian setting two mums, the biological mother and her female partner, German media reported on Friday.

In a brief quote posted on her ministry's website, Justice Minister Christine Lambrecht said the focus must be on the child's wellbeing, including those among adults in same-sex relationships.

"The law must respond to these diverse forms of family life," she said.

On August 6, Lambrecht told the German Catholic KNA news agency that lesbian couples should "in future be able to have another woman as a mother in addition to the mother of birth, without having to go through an elaborate adoption procedure."

The reform had shrunk to being a pure show-window "Reförmchen" — a German diminutive word for marginalized reform — asserted Helling-Plahr.

In her interview with KNA, Lambrecht had argued that the second man alongside a biological father would still have to apply to adopt the child via commonly used German family court procedures.

Paragraph 1591 of Germany's civil law code (Bürgerliches Gesetzbuch, BGB) would continue to state: "[The] mother of a child is the woman who gave birth to it."

"We want to adhere to the principle that the first parental place is reserved for the biological mother who gave birth to the child. Her presence is a basic requirement. Therefore, for male couples the only option left is [still] adoption," said Lambrecht.

"Contrary to the recommendations of a high-profile working group, there will still be no automatic parental custody for unmarried fathers," exclaimed the LTO.

The meaning of LGBTTQQIAAP can be tricky to keep up with. Here is a simple guide to all the main sexual and gender identity acronyms.

Each year, Lesbian Visibility Day on April 26 gives prominence to an often unseen minority. In Weimar Berlin, before the Nazis seized power, writer Ruth Roellig put same-sex female desire on the map for the first time.