The German army will start with a new volunteer scheme next year under the motto "Your year for Germany." Defense Minister Annegret Kramp-Karrenbauer said the scheme aimed to create more social solidarity. 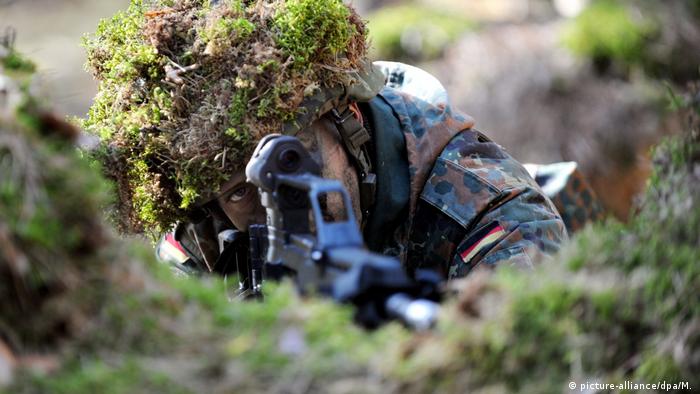 German Defense Minister Annegret Kramp-Karrenbauer on Thursday gave details of a new volunteer scheme for the army that will focus on "homeland protection."

The scheme, which Kramp-Karrenbauer presented under the motto "Your year for Germany," is to begin in April 2021 and aims to initially recruit up to 1,000 participants.

Those in the scheme will receive six months of military training, then serve for several more months over the following six years while undertaking social tasks within Germany. These would be similar to Bundeswehr missions now underway in Germany to help fight the coronavirus pandemic by distributing protective equipment, Kramp-Karrenbauer said.

Kramp-Karrenbauer said having more volunteers at its disposal would help the Bundeswehr continue this "helping hands" approach, adding that it was fortunate that the coronavirus crisis had come at a time when enough army personnel were available to serve at home.

She said the scheme targeted young people who did not want to take part in the Bundeswehr's existing volunteer program because of the possibility of being deployed abroad. Germany suspended compulsory military service in 2011, but still has some volunteers alongside its professional military personnel. 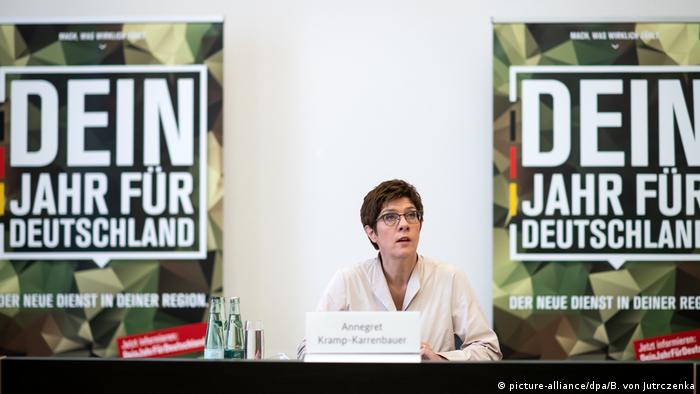 Kramp-Karrenbauer announced the plans in front of promotional posters captioned: 'Your year for Germany'

The minister said that schemes like the one she was presenting would be like "the glue that keeps society together in difficult times."

Charity organizations, however, expressed skepticism about such aspirations to promote social cohesion with a military volunteer scheme.

"With all due respect to new ideas and homeland protection, we shouldn't forget that there are already good options for becoming engaged in furthering social solidarity," Peter Neher, the president of the Catholic Caritas aid organization in Germany, told the group of newspapers known collectively as RedaktionsNetzwerk Deutschland. "I would, at the very least, critically question whether military service makes any sense," he said.

Other organizations expressed concern that existing charities and aid agencies could be at a recruitment disadvantage, as the Bundeswehr could put far more money into promoting the scheme and offering perks such as free travel on public transport.

However, they generally welcomed the fact that the scheme was voluntary.

Kramp-Karrenbauer said she was in favor of a compulsory scheme, but said this should include social service.

German Defense Minister Annegret Kramp-Karrenbauer thinks as economies struggle due to the coronavirus, a commitment of 2% of GDP to defense spending is no longer an accurate way to measure NATO members’ contributions.