Berlin has said it's considering changing its position on conscription. The country is mulling new strategies to deal with possible security threats. 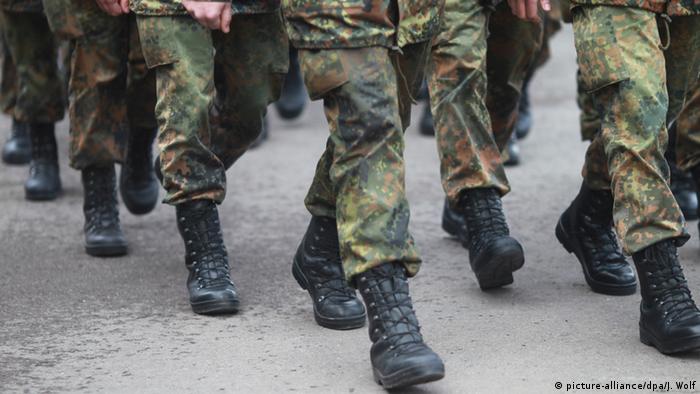 Germany's interior ministry is considering taking steps toward bringing back conscription, including compulsory service to support the military. This is according to a report by German news agency DPA, which had access to a confidential copy of a government draft proposal.

The proposal, which is to be presented to the cabinet on Wednesday, comes as the government seeks to push forward a new concept for civilian defense, titled "Support of the Armed Forces."

Germany has been mulling new security strategies in light of recent terror attacks, as well as tensions over Russia's annexation of Crimea in 2014. The new proposals are meant in part to prepare the country for the possibility of NATO actions to defend its borders.

Conscription was suspended across Germany five years ago.

The draft proposal also takes into account the infrastructure and accommodations that will be required if compulsory service were to be reintroduced, including the building of lodgings such as barracks.

Military conscription was abolished in 2011 after 55 years because the government at the time said there was no longer a need for it.

Following a series of attacks in Germany in late July, Bavarian Interior Minister Joachim Herrmann said the country should also consider deploying the army, or Bundeswehr, within Germany.

The parliamentary representative in charge of the German military, Hans-Peter Bartels, said the unfolding debate was, however, merely hypothetical in nature and not part of an actual agenda.

"Conscription would only be considered if there was a grave, long-lasting situation of danger, such as was the case with the Cold War," he told the regional daily newspaper "Neue Osnabrücker Zeitung."

The parliamentary head of the leftwing "Die Linke" Party Jan Korte meanwhile criticized the government's rekindled debate on the issue, saying it wasn't interior minister Thomas de Maiziere's job to cause panic among the population with talk of conscription, referring to de Maiziere's draft proposal.

Former US Ambassador to Turkey James Jeffries spoke to DW ahead of Vice President Joe Biden’s visit to the country. He discussed Turkey's recent coup attempt, Fetullah Gulen and the US-Turkey relationship. (22.08.2016)

Turkey's president has slammed the US for its support of Kurdish forces fighting the 'Islamic State' (IS) in Syria. US troops were photographed wearing the insignia of a militia that Ankara considers a terrorist group. (28.05.2016)

Exercises for an internal German military deployment could start as soon as November, a state interior minister has told media. The anti-terror drills involving Bundeswehr and police would be the first of their kind. (20.08.2016)

There is mounting pressure on the Bundeswehr to engage in military action abroad. Operations on home soil are also discussed. To be able to carry out those tasks, the Bundeswehr considers recruitment of EU citizens. (12.08.2016)

Volunteer soldiers quit Germany's military after a change of heart

In the past two years, almost 500 Bundeswehr soldiers have asked to leave the army on the grounds of conscience. While no one is forced to stay, leaving can be a little more difficult, and costly, than it used to be. (04.08.2016)