Following the Munich shooting on Friday, politicians are debating how to prevent, or better handle, attacks on civilians. The controversial issue of deploying soldiers within the country has again been brought up. 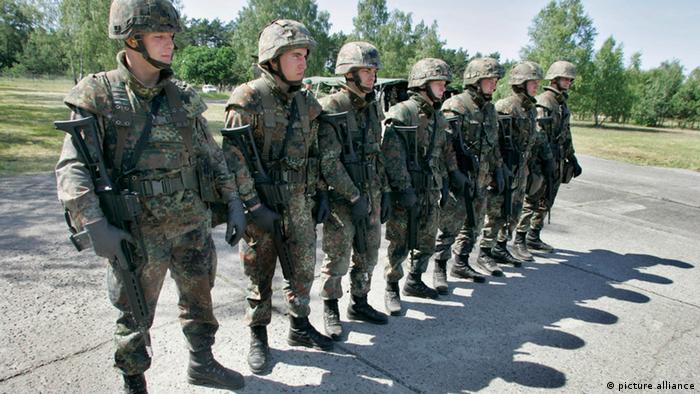 In remarks published in the "Welt am Sonntag" newspaper Sunday, Bavarian Interior Minister Joachim Herrmann advocated for the army to be allowed to deploy within Germany to support the police in case of a terror attack.

Germany's constitution, drawn up in the aftermath of World War II, places strict limits on the use of the military, the Bundeswehr, within the country's borders. Those regulations were now obsolete, Herrmann said.

"We have an absolutely stable democracy in our country," he said. "It would be completely incomprehensible… if we had a terrorist situation like Brussels in Frankfurt, Stuttgart or Munich and we were not permitted to call in the well-trained forces of the Bundeswehr, even though they stand ready."

In most European countries that was the case without question, he said

The interview was conducted following the July 18 ax attack on a Bavarian regional train in Würzburg, in which a young asylum seeker who said he was from Afghanistan wounded five passengers, but before Friday's shooting in Munich.

A total of 2,300 police officers and elite units were deployed throughout Munich on Friday evening after shots were fired at a city shopping center. The situation remained unclear for several hours and the city was locked down amid reports that several gunmen were involved.

According to Defense Minister Ursula von der Leyen, as quoted in the "Frankfurter Allgemeine Zeitung" (FAS) newspaper, a military police unit of the Bundeswehr was at the ready to be deployed because a terror attack could not initially be ruled out.

It later emerged that the perpetrator was an 18-year-old who shot nine people and then himself. The German-born teenager of Iranian heritage appeared to have acted alone. He had been planning the attack for a long time, suffered from psychological problems and acquired the pistol he used on the so-called "dark net."

Politicians are also looking into whether controls on weapons, which are already strict in Germany, need to be further strengthened.

The Bundeswehr's boot camp for journalists offers some unique lessons for conflict reporters. DW's Elizabeth Schumacher spent a week gaining a new appreciation for the challenges of reporting in the field. (23.07.2016)

The idea of the Bundeswehr deploying domestically remains controversial in Germany, and politicians have for years been discussing whether to change the constitution to make such deployments easier.

In the view of Thomas Strobl, the interior minister for the state of Baden-Württemburg, deploying soldiers was not necessary in the cases of Würzburg or Munich.

"Should we however have a large-scale severe terror situation, then we must also deploy the Bundeswehr, the Christian Democrat told the "Stuttgarter Zeitung," adding that the deployment must be under police command.

German Interior Minister Thomas de Maiziere told the Funke media group that internal security was first and foremost the role of the police but the constitution did allow the Bundeswehr to assist in situations of extreme danger. Von der Leyen had previously indicated that a terror attack would be considered such a situation.

On the other hand, the general secretary of the Social Democrats, Katarina Barley, cautioned against the misuse of the events in Munich for political ends.

"Whoever is calling for more surveillance, closing ourselves off and domestic deployment of the military in the face of this tragedy is exploiting the victims," she told the Funke media group.