Germany Moves To All-Day Schools | News and current affairs from Germany and around the world | DW | 12.05.2003

The establishment of 10,000 all-day schools across the country is just part of a €4 billion investment program to boost education standards in Germany that began on Monday. 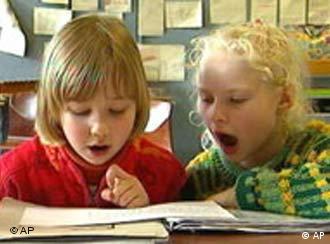 Learning might be tiring, but all-day lessons are being introduced across Germany

In the wake of German students' dismal showing in an international assessment of education standards, the German government is increasing the number of hours students spend with their teachers each day. On Monday, the government officially launched a program that will introduce all-day schools across the country for the first time.

German Education Minister Edelgard Bulmahn signed an agreement between the Federal government and the German states that will lead to the establishment of 10,000 all-day schools nationwide.

An investment in learning

As part of its €4 billion ($4.6 billion) investment program in the federal education system, the German government said it would set up a new independent agency to develop and evaluate educational standards nationwide as well as an expert commission to oversee education across the country.

Around €300 million will be made available this year for individual German states to set up the all-day schools for children aged 6-16. A further €1 billion ($1.1 billion) will be paid out over the next three years, with €700 million ($810 million) to be invested in 2007.

"We need a new culture of optimism for education," Bulmahn said in a statement, adding that all day schooling would offer more time for learning and provide "more variety in education."

Currently, the majority of schools in Germany operate on a half-day basis, with lessons ending around lunchtime.

In a study released by the Organization for Economic Cooperation and Development last year know as the Program for International Student Assessment (PISA), Germany scored well below average, joining Italy, Hungary and Poland in the bottom third. The study also revealed that German school children had poor reading skills and less knowledge of mathematics than students in other countries.

Many teachers in Germany are in favor of the educational reforms. A survey commissioned by the Germany's teacher's union last year revealed that more than half would welcome a longer school day.

Germany's Education Ministry is counting on widespread support to help facilitate implementation of the ambitious plan. Having stressed last year that a good education system "is as important as the air we breathe," Bulmahn emphasized that establishing the new schools was a collective effort.

"It's important that the process of developing all-day schools is supported by the educational authorities and by the schools themselves," Bulmahn said.

An international test that German students took in 2000 forced officials to begin asking difficult questions about the country's education system. Countries like Sweden may help provide some of the answers. (March 7, 2003)

Education Officials Press Ahead With Work on Standards

After a new analysis of international test scores, school leaders in Germany are refocusing efforts on establishing minimum learning standards. The goal is to have the rules in place by the 2004-2005 school year. (March 7, 2003)