Germany will begin allowing family doctors and general practitioners to administer coronavirus vaccines. Extra doses will also be given to German border regions with France and the Czech Republic. 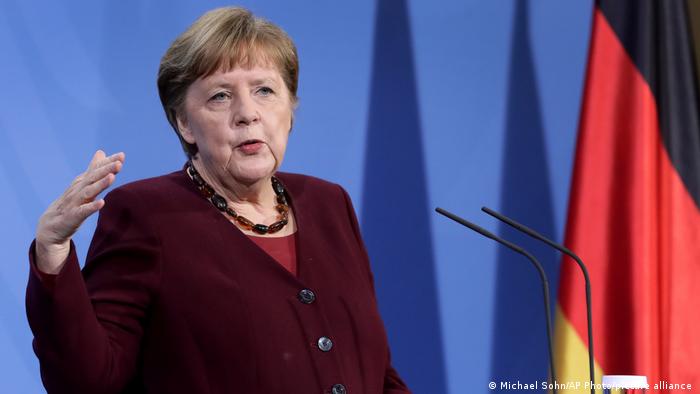 German Chancellor Angela Merkel speaks to the media in Berlin on Friday, after meeting with state premiers on the nation's vaccine strategy.

German federal and state governments held talks on coronavirus vaccinations on Friday after the European Medicines Agency (EMA) deemed the AstraZeneca jab safe for use.

German Chancellor Angela Merkel and state leaders agreed to allow family doctors to administer coronavirus vaccines after Easter, with additional doses of vaccine being given to hotspots in German border regions.

At a press conference following the talks, the chancellor outlined Germany's vaccination goals going into the next stage of the pandemic.

What is the new strategy?

A decision paper agreed during the conference outlined the measures that the federal government and state leaders will take in the coming weeks.

DW Chief Political Correspondent Melinda Crane said the decision to allow family doctors to start vaccinating "will make the administration process and the logistics more flexible, but the fact is, quantity is still a major problem." Previously, only vaccination centers were allowed to inoculate patients.

Crane said vaccinations will likely not pick up until the end of April, when "considerably more" vaccine doses would arrive in Germany. "The main bottleneck is simply quantity," Crane added.

Germany's vaccination campaign has been widely criticized for its delays.

Things were further complicated earlier this week after the suspension of the AstraZeneca vaccine  due to concerns over a possible link to blood clots. Germany has now lifted that suspension following guidance from the EMA, which ruled the vaccine safe for use on Thursday.

German health authorities have decided to issue a warning about the AstraZeneca vaccine, advising women under the age of 55 that the vaccination may be associated with cerebral blood clots.

According to German public health body the Robert Koch Institute, over 3 million people in Germany have been fully vaccinated for COVID-19, with nearly 7 million receiving at least one dose.

In addition to 40.2 million additional doses of BioNTech-Pfizer vaccine, some 6.4 million doses of Moderna vaccine are expected to be distributed to the EU in the second quarter. The Johnson & Johnson vaccine, which only requires one shot, will also be made available in the coming months.

The summit comes as cases skyrocket due to a more contagious British variant of the virus spreading across the country.

If the seven-day incidence of cases rises to 100, Germany could implement a longer lockdown to contain the spread of the virus, health experts warned on Friday.

Merkel will again meet with state leaders on Monday to discuss extending coronavirus restrictions and to confer about a plan to re-open the economy.

Germany's second-biggest city, Hamburg, is set to reimpose full lockdown measures after the seven-day incidence of COVID-19 cases there rose above 100 per 100,000 people. The city of Cologne is also tightening the rules.