German police have said medical students violated coronavirus curbs by facing off against anti-vaccine protesters outside a clinic in Dresden. Police in Dresden opened misdemeanor proceedings against 22 students who were attempting stop group of anti-vaccine protesters​​​​​​​ from demonstrating in front of their university clinic on Thursday night.

Police said coronavirus restrictions in the eastern German city only permit demonstrations with a maximum of 10 people, and the number of counterdemonstrators gathered in front of the clinic was in violation. The students could now be ordered to pay a fine.

What happened during the protest?

The medical students gathered in response to a "protest stroll" against coronavirus restrictions and vaccines.

The protest, organized on social media, was due to begin in front of the university clinic. Many of the demonstrators oppose strict new regulations requiring vaccination for access to public spaces.

The students formed a line in front of the clinic and held signs with slogans such as "Saxony, get vaccinated."

Hundreds of federal police from several German states were able to largely break up the "protest stroll" before it began, and said they had noted the identity of more than 200 people who could face penalties for breaking coronavirus gathering rules. 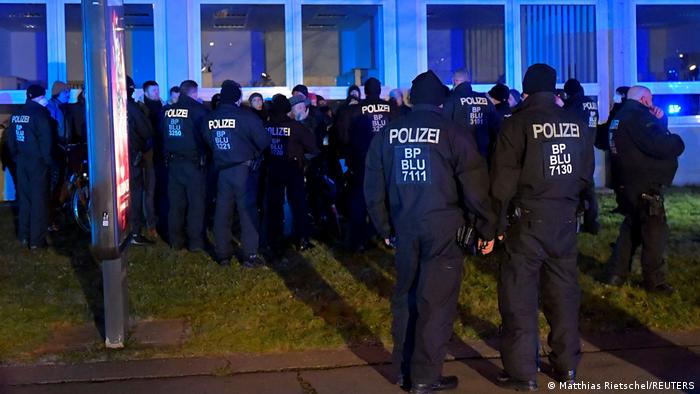 However, videos of alleged harsh treatment of the students by police drew outrage on social media, with many commenting that they were treated worse than the anti-restriction protesters.

On Friday, police said it was a "confusing and dynamic" situation as police officers moved to clear all demonstrators from the area in front of the clinic, regardless of whether they were students or protesters. A police spokesperson added that the students should have officially registered their protest. 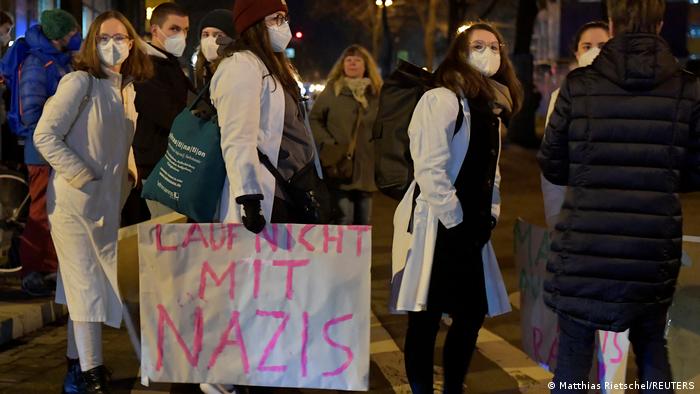 Germany's Health Minister Karl Lauterbach came out in support of the medical students, saying they had his "emphatic support."

He also said it was "disturbing" that some are now facing fines, but added that he did not have all the information.

With less than 62% of people fully vaccinated, Saxony — where Dresden is located — has the lowest vaccination rate in Germany, and among the highest rates of COVID-19 infection anywhere in the country. Protests against coronavirus measures occur there frequently.

Saxony's state premier, Michael Kretschmer, has frequently come under fire for pushing through coronavirus rules, and has even received death threats. He thanked the student demonstrators on Twitter:

"They experience every day that measures against the virus are not the problem, rather the virus itself," Kretschmer said.