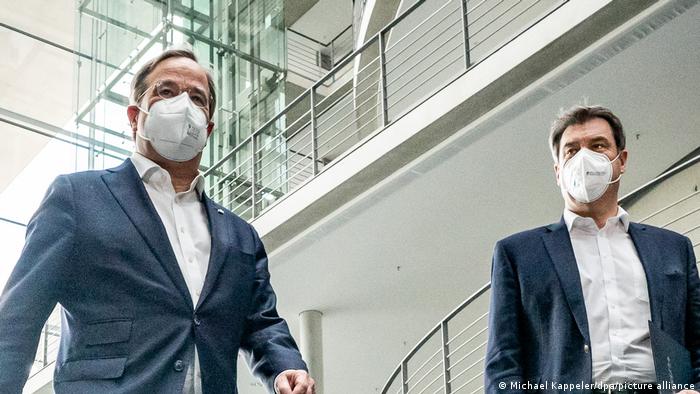 Armin Laschet, left, and Markus Söder had until now been pitted against one another

Bavarian State Premier Markus Söder on Tuesday bowed out of the contest to challenge to become successor to Chancellor Angela Merkel in Germany's September general election.

Instead, he passed on the mantle to his erstwhile rival, Armin Laschet, after losing a vote by the Christian Democrats' (CDU) senior party leadership.

"The die is cast. Armin Laschet will be the CDU/CSU's candidate for chancellor," Söder told a press conference in Munich. "My word, which I have given, stands."

"The CDU met yesterday and decided. We accept that, and I respect that. I called Armin Laschet and congratulated him. I told him that we as the CSU accept it. We offered him our full support."

Reactions from within the CDU/CSU

"Markus Söder was recognizably the candidate of hearts. But, in democracy, and especially in inner-party democracy, something else decides — and that, in the end, is the majority."

"Congratulations, dear Armin Laschet, on your new position as candidate for chancellor of the Union," she said, referring to the CSU/CSU bloc. "I look forward to the coming months of our cooperation."

Merkel's conservative bloc now appears certain to confirm Laschet as their candidate for the chancellorship.

How has Laschet reacted?

Speaking at a press conference on Tuesday, Laschet was effusive in his praise of the discussions that led to the choice falling on him.

Laschet described the debate as "intensive, transparent and open," and said he hoped these characteristics would continue to mark the work done by the CDU/CSU on other issues in the future.

He also expressed great gratitude to Söder for having displayed trust in his colleagues from the CDU, saying that he would work closely with the Bavarian premier during the election campaign and beyond. He called the CDU/CSU alliance an "anchor of stability" in Germany. He also denied that any "price" had been paid to Söder for withdrawing his bid to be candidate.

In his speech, Laschet outlined several points of the CDU/CSU election platform, including the aim of keeping Germany up to date with the latest technology and the promotion of diversity as "a chance, not a threat."

In a response to a journalist's question, he also praised Merkel for her decision to remain neutral in the question of her potential successor, saying that stance was appropriate in view of the "new era" that would start at the end of her term in office.

What happened in the CDU vote for Laschet?

A late-night vote by senior CDU members — after more than six hours of talks late Monday — appeared to end the divisive battle between Laschet and his Bavarian challenger.

Laschet won the CDU party leadership's support by garnering 77.5% of support in a secret ballot of 46 executive board members.

Söder had said he would accept the decision, and step aside "without resentment" if it went against him.

"The CDU is the stronger and bigger sister party and only they can decide if this broad majority is there or not," Söder said on Monday.

Traditionally, the two parties choose only one person to lead their election campaign as single candidate for chancellor. However, there are fears in the CDU party base that Laschet — who is less popular among the electorate — will fail to deliver a good election result.

As CDU leader and premier of such an important state as North Rhine-Westphalia, Laschet would normally be a shoe-in for the chancellor candidacy. However, the CDU's popularity has taken a beating recently, as the federal government is under pressure over its handling of the coronavirus pandemic.

Söder enjoys higher national poll ratings compared to Laschet, which could make him a more competitive candidate. However, Laschet had the political support of the CDU leadership.

Outgoing Chancellor Merkel had said she will stay out of the competition to decide her possible successor.