On January 30, 1933, Adolf Hitler was named Reichskanzler. Germany's present-day chancellor, Angela Merkel, has said it's crucial to mark Germany's dark history - as Hitler's rise was aided by the majority's silence. 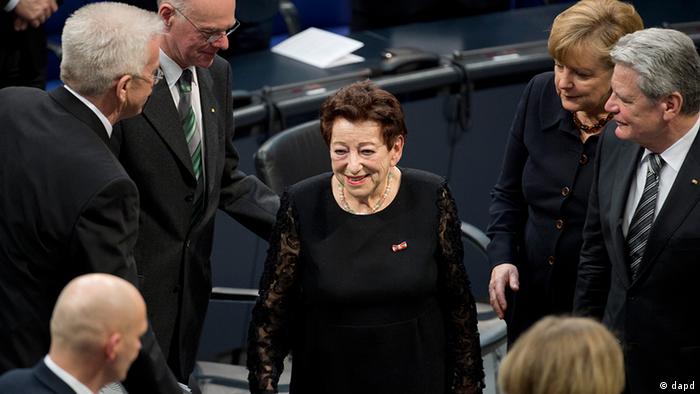 German Chancellor Angela Merkel opened an exhibition at the center documenting the Nazi era in Berlin called "Berlin 1933 – the path into dictatorship." Almost simultaneously, representatives in the German Bundestag held a ceremony in memorial of the victims of Adolf Hitler's rule.

Merkel said that Germany's descent into fascism should serve as a reminder that human rights and basic decency do not happen by themselves, but rather require courageous and vigilant people to protect them.

Hitler was able to take power "because parts of the elite and society played along, but above all because the greatest majority of Germans tolerated him," Merkel said. "Because a broad majority simply looked away and kept quiet."

The "Topography of Terror" memorial is built in the center of Berlin around the ruins of the old nerve center of Hitler's regime, the offices of the Gestapo secret police, the high-ranking SS militia that became an official paramilitary and other instruments of Nazi repression.

Across town in the German lower house, the Bundestag, parliamentary speaker Norbert Lammert said the Reichstag parliament building, rebuilt in the 1960's, should serve as a chilling reminder.

"The Reichstag is a silent witness of the dismantling of Germany's first democracy 80 years ago," Lammert said. Lammert warned against the complacency of considering Hitler's rise to power a "Betriebsunfall," a German term for an accident in a factory or some kind of blip or unlikely occurrence, saying it was neither coincidental nor unavoidable.

The day the Weimar Republic died

Adolf Hitler's National Socialist Party (NSDAP) secured around one-third of the vote in the 1932 elections in the Weimar Republic, the democratic German society established in the aftermath of the World War I.

Owing to the fragmented political landscape of the time, however, as Germany was racked by recession and hyperinflation, this minority share of the vote made Hitler's party the most popular in the country.

The Austrian-born political outcast of the 1920s ultimately convinced ailing President Paul von Hindenburg - who at first resisted the move - to appoint him as chancellor. This ultimately set Germany on a path to an effective dictatorship, World War II and the Holocaust.

The ceremony in the Bundestag traditionally marks UN Holocaust Remembrance Day on the anniversary of the liberation of the Auschwitz-Birkenau concentration camp on January 27. As this year's date fell on a Sunday, the Bundestag ceremony was moved to Wednesday to coincide with the 80th anniversary of Hitler's rise to power.

Prominent Holocaust survivor and German Jew Inge Deutschkron addressed the Bundestag on Wednesday, talking about the fear and suffering of Jews in Berlin during Hitler's reign. The 90-year-old Deutschkron also focused on the importance of remembering, saying that until "the truth, the whole truth" was known, a recurrence could never be ruled out – saying that's why she was still working towards the goal with all her remaining strength.

President Joachim Gauck, Merkel - on her way to receive Egyptian President Mohammed Morsi – and the speaker of the upper house, Winfried Kretschmann, were among other participants at the parliamentary ceremony.

Journalist and author Inge Deutschkron survived the Holocaust in Berlin. She shares her experiences in her books and in schools. This courageous woman is now celebrating her 90th birthday. (23.08.2012)

International Holocaust Remembrance Day is January 27. Numerous memorials across Germany ensure the millions of victims are not forgotten.

In 1922, Walther Rathenau became the first Jew to serve as Germany's foreign minister — and was assassinated by the far right six months later.