Germany looks back at its Mandela-skeptic past | Germany | News and in-depth reporting from Berlin and beyond | DW | 07.12.2013

Germany looks back at its Mandela-skeptic past

For a long time, Nelson Mandela was a controversial figure among German politicians, while numerous German companies enjoyed good business relations with the apartheid government. It took a while for this to change. 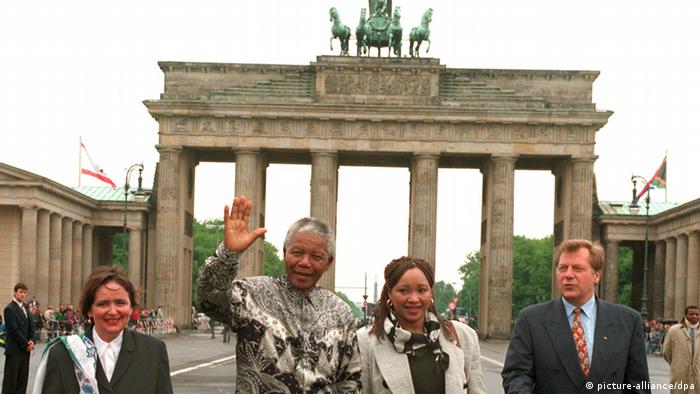 "A huge personality," "a glowing example," "a person full of patience, love and tolerance" - these are some of the descriptions of Nelson Mandela appearing in the German press in the wake of his death. The former South African president is being celebrated as an icon of a peaceful struggle for freedom and politicians from all segments of the political spectrum are paying tribute to him and his achievements.

However, a look back at the history of South African-German relations shows that public admiration of Mandela in Germany has not always been the norm. Some politicians of the past mistrusted Mandela.

Until the 1980s, successive West German governments took a cautious approach to Mandela, especially the conservative ones. Former foreign minister Hans-Dietrich Genscher (Free Democratic Party) believes that some of these politicians have now been forced to reconsider their former stance.

Genscher himself advocated Mandela's release from prison to the United Nations in the 1980s - a move considered controversial in Germany. "I was accused of supporting a murderer and terrorist," Genscher told DW.

The categorization of Mandela as a "state terrorist" was also openly accepted in the US and UK. "There is no doubt that the German government could have and should have approached the inhuman apartheid policy and the thoughtless American and British stance in a far more critical fashion," commented Ludger Schadomsky, a DW Africa expert. 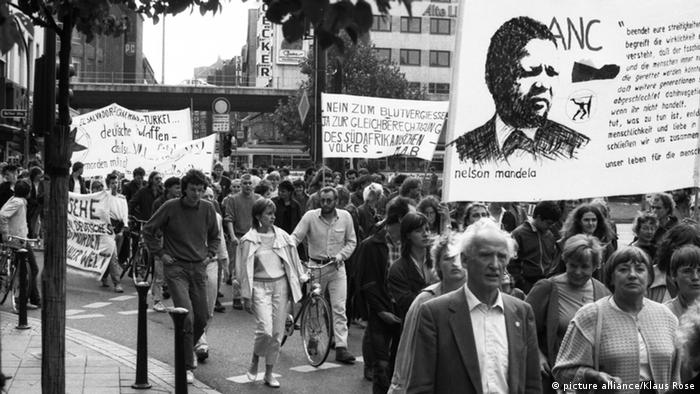 Over time, the anti-apartheid movement grew a following in Germany

At the same time, the 1980s saw the rise of a strong anti-apartheid movement. Products imported from South Africa, such as wine and fruit, were suddenly being boycotted by various church groups, civil organizations and school students. And although the German government distanced itself from the apartheid regime, it did not at any point take part in the boycott initiative. According to Uschi Eid, member of Germany's Green Party and vice-president of the German Africa Foundation, some politicians at the time had no moral qualms about conducting friendly relations with South Africa.

According to Michael Monnerjahn from the German-African Business Association, from today's perspective all this can classify as double standards among corporations. On public posters, German companies of the time denounced the existing racial segregation - however, they did not employ black Africans as managers.

German business in South Africa was shaken up by the upheaval in the country in the late 1980s. "Even if as a company manager you had a positive view of Nelson Mandela back then, you still had doubts as to whether he'd be able to restore social stability," said Monnerjahn. 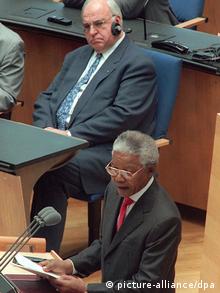 A widespread change of opinion

South Africa's gradual opening and intention to end apartheid following the change of government in 1989 was unanimously welcomed by German politicians. This was the time of "Pretoriastroika" - a play on the word "Perestroika" used by Soviet politicians to refer to the restructuring of the Soviet political and economic system after the fall of communism. The way Mandela collaborated with then-President F. W. de Klerk, conducting negotiations from his prison cell, had a major influence on the change in attitude among German politicians, according to Schadomsky.

However, some skepticism was still present in Germany as late as 1996. This is when President of the Bundestag Rita Süssmuth (from the Christian Democratic Union party) invited Mandela, who had at this stage been South African president for two years, to speak in front of the German parliament. "The opinion was divided among certain politicians and members of parliament," Süssmuth recalled later on in a radio interview. But in the end, Mandela was permitted to make his speech, and "he stood there, his speech quiet but intense, and he had an effect on our parliamentarians."

Reservations and skepticism: today, these words in reference to Nelson Mandela seem like relics of a different era. For a long time now, Madiba - as Mandela was called in his home country - has been an immortal symbol of freedom and an icon for German politicians. According to Schadomsky, Mandela managed to win over his German skeptics with his charm.

German politicians reacted with shock and dismay to the death of Nelson Mandela. The South African ex-president and Nobel Peace Prize laureate will be forever linked with the struggle against apartheid. (07.12.2013)

South Africa faces up to a world without Mandela

South Africans have been mourning the death of their first black president, describing his demise as a great and sad loss for South Africa and the rest of the world. (07.12.2013)