Germany Launches EU Initiative to Tackle Right-Wing Extremism | News and current affairs from Germany and around the world | DW | 08.01.2007

Germany has put forward measures to help Europe unite forces in the battle against the far-right. This comes amid rising rates of racially motivated crime in the country. 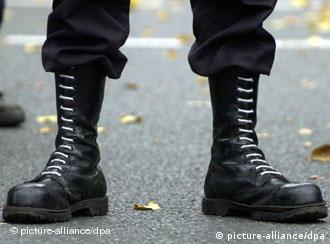 The European proposals include the introduction of minimum sentences for stirring up racial hatred and incitement to violence, as well as the denial of acts of genocide, such as the Holocaust, and the use of the Nazi swastika symbol. 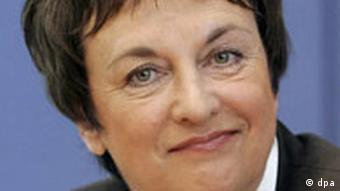 The justice minister has put forward the measures as part of her plans for Germany's six-month presidency of the European Union.

Zypries told the Bild newspaper on Monday that officials are worried about increasing levels of cross-border activities engaged in by right-wing radicals in Europe.

"That is why we are immediately going to introduce a new initiative during the European Union presidency to lay down uniform standards when it comes to fighting right-wing extremism," she said.

The plans had been blocked by Italy up to now. But Zypries said that the new government in Rome had signalled its support.

"That would open up the way for to go ahead with them," she said.

Another plan announced by Zypries that aimed at tackling right-wing extremism would boost cooperation among police forces across Europe.

This would make it possible, for example, for police to find out whether a suspect had a criminal record in his or her home country after filing an e-mail request. She said that this would not only help improve security but also help reduce workloads.

"The German authorities already have access to criminal records in France, Belgium and Spain," she said, saying such a move would make it more difficult for criminals to flee abroad.

"In the coming months I will work towards ensuring that this is also possible in other EU states."

Racist crimes up in Germany

Figures released on Friday which tracked the number of racially motivated crimes from January to November indicate that 2006 could have seen a five-year high in such crimes. At the end of November, police had recorded over 11,000 crimes with a far-right background, including over 650 acts of violence. 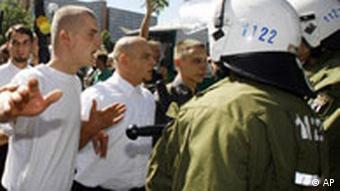 A right-wing extremist march through Berlin

Final official statistics will not be published until May and are often significantly higher than the end-of-year figures because of delays in police reporting.

In November, the state of North Rhine-Westphalia registered the highest number of racially motivated crimes in 2006 with 176 cases. Berlin followed in the ranking, reporting 164. The police chief in the German capital has recently said that the number of cases has almost doubled this year.

The news prompted SPD parliamentarian Niels Annen to call for a show of solidarity against right-wing extremism in the form of a democracy summit. Members of the Green Party and the PDS-Left Party have called for a cross-party strategy to tackle the problem.

A guide to potential racial hot spots in Germany will go live on the Internet and be published in brochure form in time to warn visitors to the World Cup of areas known for far-right extremism. (03.05.2006)

Germany Steps Up Its Measures Against Neo-Nazism

As anti-foreign sentiment shows few signs of subsiding, Germany's government has decided to develop the program to combat right-wing extremism, anti-Semitism and xenophobia, initiated by the previous government. (25.11.2006)