What is Germany's international role, and what does that mean for the Bundeswehr? Experts and citizens are called on to participate in the debate on German security policy and the future of the armed forces. 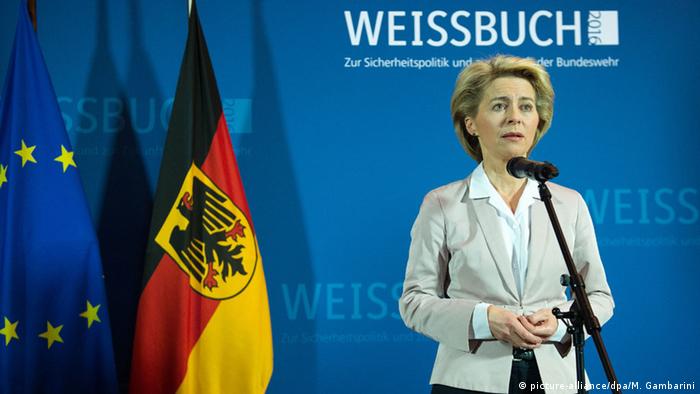 Every few years, the German government defines its security policy guidelines in a so-called White Paper, which receives its name from the color of the document's cover. The last edition was published in 2006 and before that, in 1994.

In a globalized, rapidly changing world, such lengthy intervals turn White Papers into much more than just sequels. In 1994, just a few years after German reunification, security policies were put on a new footing. The 2006 analysis was influenced by the 9/11 attacks on the US - and their consequences. At the time, security policies were attuned mainly to Afghanistan. Russia was defined as a partner; the Arab Spring and the emergence of the "Islamic State" (IS) terrorist militia were still in the distant future.

2015 sees a changed world: war rages in Ukraine, Russia and NATO eye one another like they did when the Iron Curtain still stood, and Germany is delivering weapons to the Kurdish Peshmerga fighting against the 'IS.'

No illusions about Russia

Redefining the relationship with Russia is one of her goals. Germany, she warned, should not give in to illusions: Vladimir Putin is resorting to dominance and spheres of influence to replace internationally agreed rules and guaranteed rights. "The Kremlin's new policy began long before the crisis in Ukraine and will occupy us for a very, very long time to come," she added.

Speaking at a conference in Berlin to launch the compilation of the planned White Paper, the defense minister also underlined the importance of finding ways to re-establish a reliable neighborhood with Russia at some point.

Over the next year and a half, more than 200 internationally-renowned politicians, researchers, media and industry experts, Bundeswehr and other NATO armed forces are scheduled to debate Germany's future security policies in workshops, at conferences and hearings. Germany's new White Paper is due to be published in the summer of 2016.

Public opinion is of interest, too. Citizens can offer ideas, suggestions and criticism in a forum on a special website. "Germans have been complaining for a long time that there is no real political debate on security policies and the role of the Bundeswehr that is not linked to concrete crisis situations," Ursula von der Leyen said. The new White Paper offers that opportunity, she added. 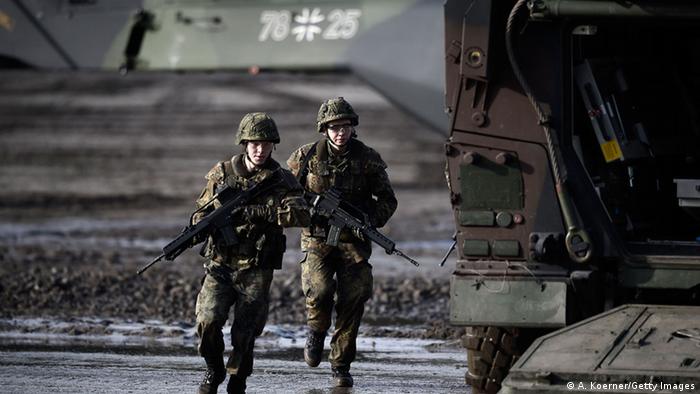 Germany is considering a stronger military role in international affairs

Chatham House director Robin Niblett told the conference that the public debate is immensely important. "I'm fully aware that domestic opinion in Germany is highly skeptical about Germany playing a proactive role and about thinking of itself as a mid-sized power, never mind a mid-sized great power," he said. To persuade the public, he urged German leaders to be "consistent in their messages, about the inescapability of Germany's shared responsibility to meet the dangers of today's interdependent world."

Germany, he said, must be seen as a "responsible mid-sized power that protects and develops, along with others, the European and global order".

On the one hand, Germany is too small for the globalized world, he said, adding that it depends on multilateral cooperation. At the same time, politicians have recognized that the country is too large to "simply duck in the face of threatening international developments, or to fill functional niches."

Germany isn't trying to seem larger or smaller than it is, the defense minister argued. The country is prepared to take on more responsibility, she said - but that doesn't entail a "rigid catalogue for operations or a checklist for missions abroad."

Armed Bundeswehr missions will no longer generally be excluded in the future, von der Leyen said, adding that each crisis and every conflict would be closely evaluated and as a result, operations might differ. The White Paper is set to define the basic capabilities the Bundeswehr needs for an evolving modernization process, and to match demand with its abilities.

Germany must be a reliable alliance partner, von der Leyen urged - and that includes modern arms procurement, up-to-date personnel policies and an adequate budget. She reminded the conference that over the past years, German troops have faced fundamental change: conscription was discontinued, reforms "left not a single structure untouched" and in addition, the armed forces are beset by severe problems with military equipment.

The White Paper is to be divided into four sections. Apart from the future of the country's security and defense policies, partnerships and alliances will be on the agenda. What are the possibilities, necessities and boundaries in the EU, NATO, the OSCE and the United Nations?

"I believe that in the coming years, we will experience the interconnectedness of our international alliances and organizations, even beyond the customary security architecture," von der Leyen said.

As troops return home from the Middle East, more and more of them are being diagnosed with mental disorders. The government says it's because PTSD is less stigmatized. The opposition says not to send people to war. (11.02.2015)

To lead or not to lead?

"Leading from the center" - that's how Defense Minister von der Leyen described Germany's role in international politics. Many listeners considered this to be a mere platitude. Nina Werkhäuser reports from Munich. (07.02.2015)

The German government has proposed a series of reforms to make the military more attractive as an employer. Bundeswehr soldiers have been complaining of lack of equipment and poor facilities in the barracks. (30.01.2015)