The man was walking home wearing a traditional skullcap when he was verbally and physically abused by three men. 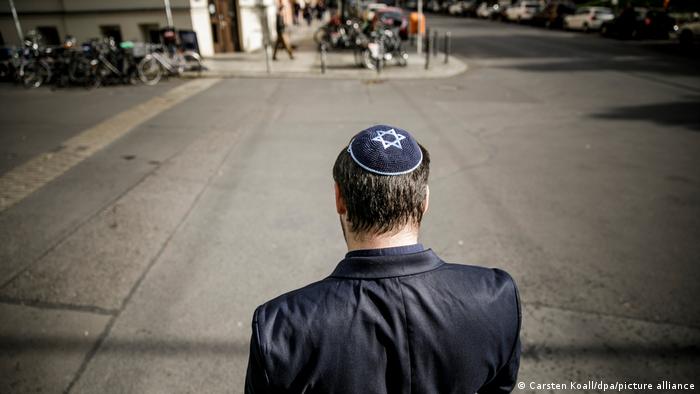 Police in Germany's capital city are investigating a Jewish man's report of being punched in the face and abused with antisemitic language.

The 41-year-old man passed three other men in Durer Square while walking home in Berlin around 2:15 a.m. (0015 UTC) on Saturday, according to a Berlin police news release.

He was wearing a traditional skullcap, also known as a kippa or yarmulke, at the time.

The police report said the group of men insulted him before one of them punched him in the face, knocking him against a shop window.

The assailant was also said to have used an antisemitic insult.

The Jewish man was taken to a hospital, where he was treated and released.

His attackers have not yet been found.

Police are carrying out an investigation into the incident at the State Criminal Police Office.

The attack follows an increase in antisemitic incidents in Germany in recent days.

The uptick occurred following a cease-fire in the worst outbreak of fighting in years between Israel and Palestinian militants Hamas in the Middle East.

In Germany, there have been protests outside of synagogues, where an Israeli flag was burned, flags of Palestinian militants Hamas were flown and antisemitic slogans shouted.

There were also reports of antisemitic agitation at pro-Palestinian demonstrations in several cities.

Chancellor Angela Merkel reiterated in her weekly video message on Saturday that Germany's constitution, or Basic Law, "guarantees the right to freedom of expression and peaceful assembly."

But she said it leaves no room "for attacks against people of other faiths, no room for violence, racism and agitation."

"Anyone who brings hatred of Jews onto our streets, who expresses seditious insults, is outside of our Basic Law. Such acts must be punished consistently and have noticeable consequences for the perpetrators," Merkel added.

The head of the Central Council of Muslims in Germany has also condemned antisemitic chants during pro-Palestinian protests.

kmm/sms (AP contributed to this report)