Germany is not shrinking

Until recently, Germany's population was shrinking because not enough children were being born. Increased immigration and higher birth rates have changed the prognosis. Has a demographic crisis been averted? 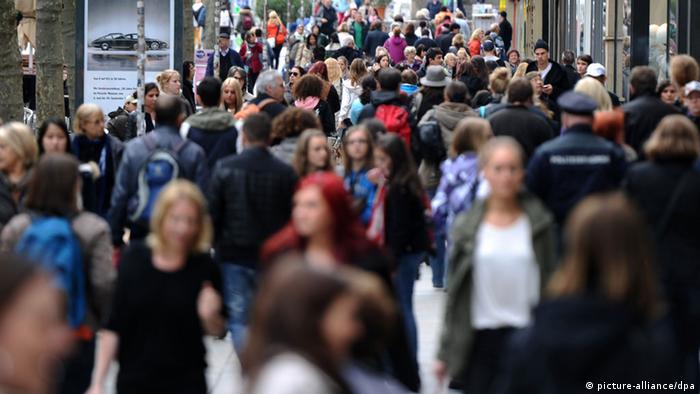 For many years, it was a generally accepted fact that the German population was going to fall. The Federal Statistical Office and the Federal Institute for Population Research pointed to continually low birth rates and not enough immigration as the reasons for this development. If birth rates remained constant at 1.4 children per woman and immigration at 100,000 people per year, by 2060 Germany would no longer be home to around 80 million people - the figure would have fallen to around 68 million.

However, according to revised scenarios the German government has presented in its latest summary of demographic-political developments, this shrinkage apparently isn't happening. The message is that ongoing high immigration, coupled with a recent increase in the birth rate, could keep the country's population stable for another forty years.

Until now, statisticians have assumed the migration balance would be 100,000 to 200,000 per year. However, recent government estimates said this figure was more likely to be 300,000.

The birth rate also shows an upward trend, the government says. It had been dropping for decades, but now appears to have stabilized. The Federal Statistical Office assumes that 1.6 children are currently born for every one woman in Germany. This is also included in the report: "With net migration of 300,000, combined with a birth rate of 1.6 and a more pronounced rise in life expectancy, the population of Germany would remain stable at around today's levels until 2060." 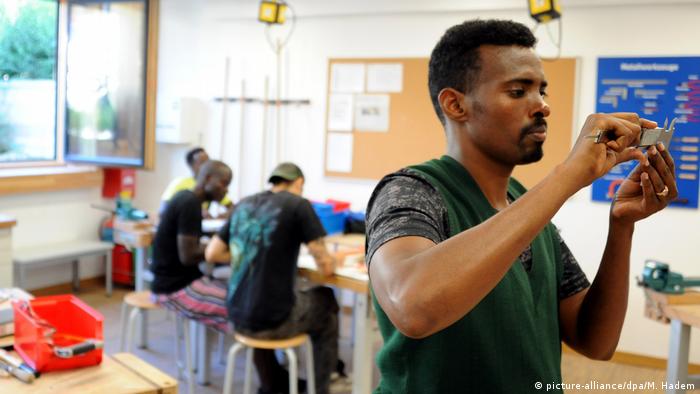 Refugees are one of the reasons Germany's population level is set to remain stable.

The large influx of refugees to Germany over the past two years has thrown long-term prognoses into confusion. In 2015, Germany recorded net migration of more than one million people as a result of the arrival of refugees from Syria, Iraq and Afghanistan. In 2016, that figure was 750,000 people.

By way of comparison, between 1990 and 2008 more people emigrated from Germany each year than moved there. "The migration events of recent years have contributed to the fact that the population as a whole has increased," Germany's Minister of the Interior Thomas de Maiziere (CDU) said at the presentation of the report in Berlin. Statisticians recently announced a new population high: At the end of 2016 there were 82.8 million people living in Germany.

Ageing population: An earthquake for the job market

So does this mean the oft-mentioned demographic crisis has been averted? De Maiziere says not. Despite immigration and rising birth rates, the government's latest prognoses show that the average age of the population will increase significantly. According to the report, this means that with a net migration figure of 300,000, the old-age dependency ratio would be only slightly lower than in the variants with lower immigration. In recent years, average life expectancy in Germany increased by almost 2.6 months a year, to 78.2 years for men and 83.1 years for women.

This increase in life expectancy also means increased challenges for social welfare provision. Pensions and care services for the growing number of old people must also be financed. Immigrants need to be integrated into the job market, and there has to be enough accommodation for both German nationals and new arrivals. "What we want to see is high employment, education, the compatibility of work and family, but also social security in old age," the interior minister explained. 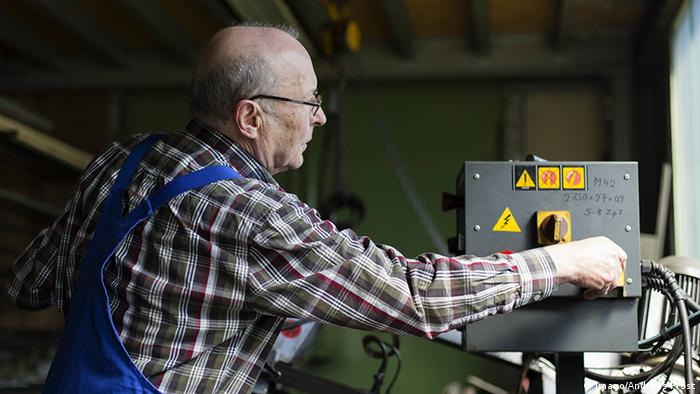 An elderly man works for the machine building industry: will Germans have to work longer?

Professor Enzo Weber, who heads a research department at the Institute for Employment Research (IAB), predicts huge problems, particularly for the labor market. "In the near future, in just a few successive years, 13 million baby boomers will reach statutory retirement age," Weber told DW. That's 13 million new pensioners, who will simultaneously cease to be part of the labor market and the working population.

According to Professor Weber, higher birth rates will not plug the gap. Only immigration can do that. "Even if they were to snap their fingers and raise the birth rate to 2.5 children for every woman, that wouldn't stop the demographic changes that are going to take place on the labor market over the next twenty years." The workforce, he said, was shrinking far more quickly than the overall population because the retirement age continued to hover around 65.

This means that for the workforce in Germany (currently a record 43.8 million people) to remain even remotely stable, it would require 400,000 more people to immigrate every year than emigrate. But Weber notes that the integration of so many immigrants into the labor market and society could also place society under too great a strain, which is why he's assuming a marked drop in employment figures is more likely.

This will have disastrous consequences, especially in certain rural areas and some business sectors. "In many places the labor market will dry up, and entire value chains that depend on a specific minimum size could collapse altogether in a fairly short space of time," Weber says. He explains that, in recent years, only exceptional factors have enabled the market to avoid this collapse: factors like the influx of southern and eastern Europeans after the euro crisis, or the arrival of the refugees. "But it won't stay like that forever," he warns.

The German government will be holding a demographics summit in Berlin on the 16th March. It aims to explore how public authorities, society and the economy can meet these challenges. Professor Enzo Weber is calling for flexible work-life models, and a systematic ongoing development of the compatibility of family and career. Ultimately, though, he believes that some dearly held certainties will nonetheless fall victim to developments. The universal retirement age is one of them. For future generations, this may well be just a relic of the past.

German trucking companies are running out of drivers. Many truckers are reaching retirement age, and younger Germans are choosing other career paths. (31.08.2016)

Germany recorded a sharp decline in the number of asylum-seekers entering the country in 2016, but requests for political asylum increased by over 56 percent as compared to 2015. (14.01.2017)

The future is now - The working elderly