Germany is losing the cream of its workforce to other countries | Germany | News and in-depth reporting from Berlin and beyond | DW | 27.05.2009

Germany is losing the cream of its workforce to other countries

A new migration study says an alarming number of highly qualified Germans are packing their skills and certificates and heading for foreign shores, the majority of them on a one-way ticket. 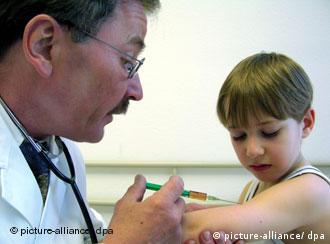 Thousands of German doctors have chosen to work abroad

Researchers at the independent Council of Experts on Integration and Migration have found that some 180,000 Germans have left their country in the past five years. And that, says Council chairman Klaus J. Bade, presents a national-scale "personnel problem.“

He says it's time for politicians to wake up and realize that those who are leaving are better qualified than those coming in from elsewhere. One field where the personnel pinch is being acutely felt is medicine.

The Council's latest report shows that more than 3,000 medical staff, most of whom were trained in Germany, left the country in 2008. That brings the total number of German doctors working abroad to 19,000. Meanwhile, Bade points out, there are places in the eastern part of the country, the former GDR, where the lack of medical practitioners is reaching crisis proportions.

In order for the situation to change, Bade says it's crucial to take a new look at immigration laws. He suggests a system which would give priority to people who could offer Germany needed skills.

The migration researcher also said Germany should do more to attract international talent. "We don’t operate a welcome culture,“ he said, adding it was high time Germany implemented a national policy for easier recognition of foreign qualifications and that there should be active encouragement for foreign students to stay in Germany after graduation.

Many people have lost their jobs due to the worldwide financial crisis. In developing countries with no unemployment insurance, they are now forced to work in positions with low pay and no protection, an OECD study says. (08.04.2009)

German unemployment jumped more than expected to 8.3 percent in January, the third straight rise and biggest increase in nearly four years as the fallout from the global slowdown hits Europe's biggest economy. (29.01.2009)

Germany's population is noticeably shrinking. By the year 2050, there will be 10 million fewer people in the country then there are today -- with dramatic consequences for the working world. (13.01.2009)