Many people have lost their jobs due to the worldwide financial crisis. In developing countries with no unemployment insurance, they are now forced to work in positions with low pay and no protection, an OECD study says. 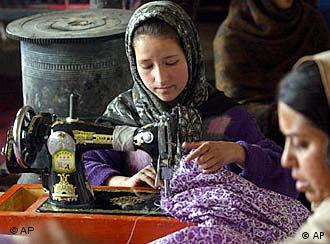 Women make up the majority of workers in poor quality jobs

Some 1.8 billion people, or more than half of the global labor force, are working without formal contracts and social security, according to the Paris-based Organisation for Economic Cooperation and Development (OECD).

This level is expected to increase to two-thirds of the workforce by 2020 and could go even higher if more jobs are lost to the economic crisis and more migrants return home to informal sector jobs, said the OECD report "Is Informal Normal?" which was released on Wednesday. In comparison, 1.2 billion people are officially employed worldwide.

"Even during good times with robust growth rates, in many developing countries informal employment increased in some regions," said Johannes Jutting, one of the study's authors. "Though India grew during the last decade above five percentage points per year, people there feel better jobs are not being created."

Jutting said nine out of 10 employees in India, or some 370 million people, did not have formal social security.

This informal employment had severe consequences for poverty in developing countries, the study said. Low pay, with no social benefits, increased the likelihood that the Millennium Development Goal of halving poverty worldwide by 2015 would not be met.

The OECD said "immediate and unconventional action" was urgently needed. It said measures were necessary to improve infrastructure, help develop skills, promote institutional reform and increase access to resources for informal businesses both in the formal and informal employment sectors.

These steps should be accompanied by public works projects and better access to micro loans.

A new study by the EU Commission says that jobless rolls in the European Union will swell by a further 3.5 million this year as the global economic slowdown batters labor markets across Europe. (18.02.2009)

Germany's army of temp workers may suffer amid cutbacks

The German government has advocated inexpensive temporary employment for years. Now, with the financial crisis affecting auto makers and other giant producers, tens of thousands of temp workers stand to lose their jobs. (03.11.2008)