Germany′s Army of Temp Workers May Suffer Amid Cutbacks | Germany | News and in-depth reporting from Berlin and beyond | DW | 03.11.2008

Germany's Army of Temp Workers May Suffer Amid Cutbacks

The German government has advocated inexpensive temporary employment for years. Now, with the financial crisis affecting auto makers and other giant producers, tens of thousands of temp workers stand to lose their jobs. 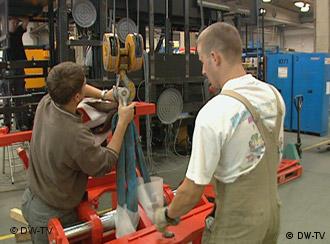 They are cheaper than their salaried colleagues. They don't get extra bonuses for Christmas and vacations. But most importantly, car makers and other manufacturers can get rid of temporary workers in a pinch.

"There are of course good people who you are sad to see go. But it is the quickest and least bureaucratic way to cut the payrolls," said Ottmar Zwiebelhofer, the head of a auto-parts maker Koenig Metall in the western state of Baden Wuerttemberg.

It is a given that the first to lose their jobs in hard times are temp workers -- and that's not just the case at Koenig Metall. Auto supplier Hella isn't renewing the contracts of some 200 of its temporary workers; its competitor Honsel is giving 100 temps pink slips. At German car giant VW, thousands of temporary jobs are hanging in the balance. 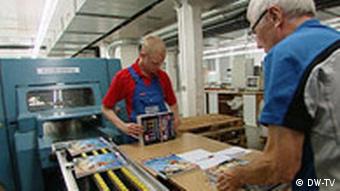 Many workers hold the same temp job for years

It's not only short-term hires who are affected. Some workers have had their factory jobs for years, but continue to be officially employed and paid through a temp firm. Just a few weeks ago, many of them hoped to be taken over by the companies themselves.

But while metal-industry companies have been swimming in orders in the past years, the boon hasn't translated into many employment contracts. Instead, companies have chosen to benefit from the flexibility of workers from temp agencies.

That system that is now turning on itself, said Hartmut Seifert, labor market expert for the union-affiliated Hans-Böckler-Stiftung foundation. "We know that there is a two percent quota of temporary workers. But there are companies whose work force is made up of over 20 percent temps," said Siefert.

The boom in temp agency work was started by the last German administration, a coalition of Social Democrats and Greens that devised the Agenda 2010 package of social reforms. The watchword back in 2003 was "marketplace flexibility."

Since then, temp workers have been allowed to be in a job for more than one year -- a ruling that was embraced enthusiastically by companies. The government's goal at the time was to use temp work to create more permanent employment, but things didn't work out that way. 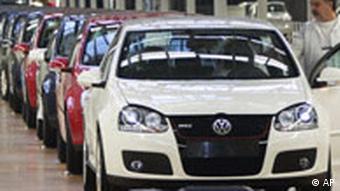 Those in export industries, like cars, will be hardest hit

Instead, well known temp agencies like Randstad, Adecco and Permacon were booking heavy profits, and looking desperately for qualified personnel. In the last year alone, the number of temp workers in Germany has doubled to 750,000, even while unemployment figures have fallen.

Those days are over, labor-market expert Seifert said. "It is entirely possible that a third of this number will lose their job in the next months."

It's not just the auto industry where temp workers face hard times. Many temp workers are employed by companies in machine-making, pharmaceuticals and chemicals -- industries that live from exports and could run into serious problems amid the world economic crisis.

Temp workers "have a higher risk of being laid off. They earn less than permanent employees, and have less access to further job training," Siefert said.

This means they have less opportunity to improve their chances at getting another job, he noted. He believes temp workers should get a "risk premium" -- in the form of higher wages -- for taking so much risk in their employment.

While it may be small comfort for those who could lose their jobs in the coming months, the European Union is trying to make the equation fairer. New guidelines on temporary workers signed last week by the European Parliament demand that temps get equal wages for equal work.

The number of unemployed people in Germany has sunk below three million for the first time since November 1992. But although it's a nice snap-shot, the worst is yet to come, says DW's Rolf Wenkel. (31.10.2008)

The choked voices on the airwaves telling tales of job losses, repossessions, debt and downright misery signal the seismic shift in Ireland's economy that has caught thousands unaware. (19.10.2008)