Germany introduces biometric cards for foreigners | Germany | News and in-depth reporting from Berlin and beyond | DW | 30.08.2011

In a bid to prevent identity fraud, Germany is digitalizing its residence permits for non-EU citizens. Instead of a paper document, they'll be given a new biometric chip card - shaped like a credit card. 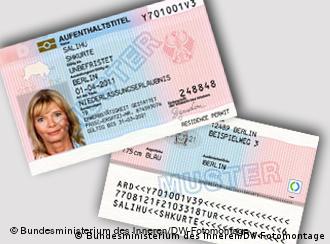 The new cards are based on German identity cards

From Thursday, September 1, non-EU citizens living in Germany will be given electronic chip cards in place of their existing paper residence permits.

The cards will contain a biometric photo and two fingerprints. Cardholders will also be given an individual PIN code. The Federal Office for Migration and Refugees claims storing such biometric data will help prevent identity theft.

But, at a cost of 110 euros ($159) each, the new cards won't come cheap. The special chip containing the data is manufactured at the Berlin-based Federal Printing Office. The cards - like their paper predecessors - will be administered by the local immigration offices across Germany. For migrants and refugees resident in the country, the application process will take about six weeks.

Those who apply to extend their residence permits have to appear in person at the immigration authorities - once to hand in the application and once to collect their new card. This includes children; from the age of 6, they'll have their fingerprints taken, and from the age of 10, they will also be required to sign their own signature.

Philipp Spauschus, spokesman for the German Interior Ministry, said the authorities have to be convinced that the person making the application really exists. That could mean that even children under the age of 6 are required to attend their local immigration office.

Two fingerprints will be stored on the card

The European Union agreed in 2008 that all member states should introduce electronic residence permits to harmonize migration policy throughout the bloc.

Like the standard German identity cards, the new residence cards can be used on the Internet to take care of administrative procedures, as long as the cardholder is at least 16.

With the help of an electronic signature saved onto the chip, the cardholder can prove his or her identity online and then communicate with the relevant authorities. Those who want to use this function at home need a specially-designed card reader, as well as the appropriate computer software, currently available in German and English.

Non-EU citizens residing in Germany will only have to apply for a new card once their existing paper permit runs out. By 2021 all residence permits should be replaced by the electronic cards.

The German Interior Ministry was forced to delay the introduction of the cards, originally planned for May, because of ongoing tests on the inbuilt chip.

The economic crisis has cost many skilled workers in nations like Greece or Spain their jobs. Some of them now want to try their luck in Germany. That makes labor experts happy, but many Germans are opposed to the idea. (28.07.2011)

Germany's leading economic gurus have called for an eventual rise in the pension age to 69 as well as more immigration. Both are among the measures that experts claim are needed to deal with demographic changes. (19.05.2011)

Thousands of foreigners live in Germany are unable to work in their chosen profession because their qualifications aren't recognized. Meanwhile, industry is crying out for skilled workers - a situation that may soon change. (23.03.2011)