Some 40 foreign fighters who fought for "Islamic State" and are in detention in Syria reportedly have German passports. Germany's conservative interior minister has said they can only return under strict conditions. 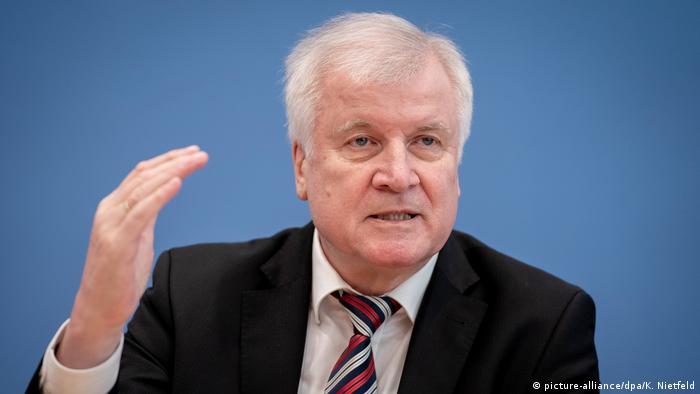 Germany will only take back "Islamic State" foreign fighters and their families if they can prove their identities and they do not pose a serious security threat, Interior Minister Horst Seehofer has said.

"In the interest of the security of our country, the German government must set out conditions for the return of former IS fighters who have German citizenship," he told the Wednesday edition of the Süddeutsche Zeitung.

German authorities would also need to review each individual case before anyone boarded a plane for Germany, to find out whether the former fighters are wanted in another country.

The conservative minister said he was not interested in repatriating foreign fighters if they are suspected of carrying out serious offenses.

"I would not want to take in dangerous persons if we cannot guarantee that we can, for example, detain them again here because they are wanted with an arrest warrant," he said, adding that the wives and children of fighters would not receive a "blank check" either.

Germany and other European countries have been debating the repatriation of foreign fighters since a recent demand by US President Donald Trump that more than 800 fighters detained in Syria be returned and prosecuted.

Trump has threatened to release the fighters, who are currently in Kurdish detention, if they are not repatriated.

Critics say it would be difficult to prosecute the fighters without witnesses or evidence of crimes committed in Syria.

Bavarian Interior Minister Joachim Herrmann, a member of Seehofer's Christian Social Union party, wants IS fighters with German passports who did not commit any crimes under German law to nonetheless be closely monitored.

"Should we not be able to provide proof [of criminal activity], we have to closely monitor the IS returnees with round-the-clock surveillance," Hermann told the Passauer Neuen Presse newspaper.

Thomas Strobl, the interior minister for Baden-Württemberg, argued that returnees who have another passport besides their German one should lose their German citizenship.

"Those who serve in foreign forces lose their citizenship. That should especially apply for German militants," Strobl said to German tabloid Bild.

Some 40 fighters in Kurdish detention are believed to have German passports, according to the dpa news agency. German authorities have reportedly issued arrest warrants for 18 of them.

Despite misgivings, Seehofer said Germany should on principle be prepared to take back fighters and their families who meet the conditions.

"We expect the whole world to take back asylum-seekers who have come to Germany and committed crimes here or are considered a security threat," he said.

"We cannot say in return: We won't take back these people."

IS bride Shamima Begum has reportedly had her UK citizenship revoked. The case has caused debate about how the UK will deal with former IS fighters, brides and children. (19.02.2019)