Germany is an attractive business location that offers foreign professionals good jobs, according to a study on expat life. The huge drawback: People often don't feel at home here. It compares poorly on many counts. 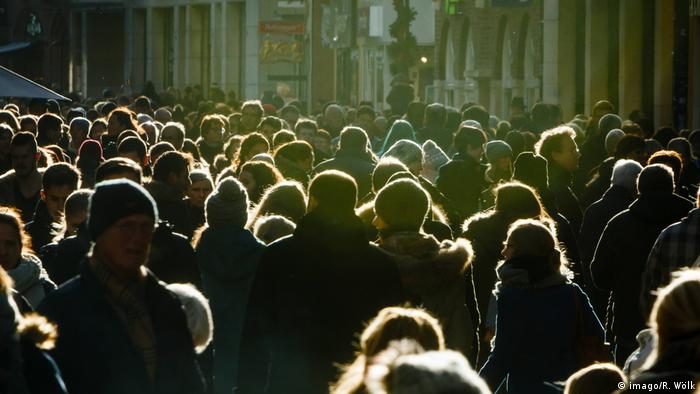 High rents, a shortage of kindergarten spots and the rising cost of living are a challenge for Germans. They are a challenge for expatriates living in Germany, too. But those aren't even the biggest problems expats face: the Germans' lack of friendliness toward foreigners is much more of a challenge, according to the fifthExpat Insider survey by InterNations, an online platform for people who live and work abroad.

The finding is by no means the first time German grumpiness has come up — expats have for years found fault with the German people's unfriendliness. This year, however, the study logs particularly poor ratings for Germany, ranking the country 36th of 68 destinations. Just four years ago, in 2014, Germany ranked 12th.

"Fifty-six percent of the people who participated in the study in Germany find making friends with locals is difficult," says InterNations co-founder Malte Zeeck, adding that worldwide, only 36 percent of the interviewees said they found making friends in their new home problematic. The public debate about migration probably hasn't helped people feel welcome, Zeeck told DW.

Even Germany's reputation as a good business location hasn't been able to counteract that impression. And Germany is a valued destination among expats: safe jobs, well-supplied and with a buzzing economy.

"Germany is a very attractive location for foreign workers," Marcel Fratzscher, head of the Berlin-based German Institute for Economic Research (DIW), told DW, adding that over the past 10 years, about 300,000 workers from other EU nations have come to Germany to work every year "because Germany offers good jobs with good training options." That isn't about to change any time soon, Fratzscher says.

No migration, no economic boom

Foreign workers are important for Germany, which currently faces a lack of skilled workers. With an eye on demographic change, Germany should take a more tolerant attitude toward foreigners: "There would not have been an economic boom in Germany without the several million people who migrated to the country from other European states over the past 15 years," Fratzscher says.

Highly qualified workers can choose to go anywhere in the world and they will only choose "to come to Germany if they find a good job as well as being accepted," the economic expert argues. "We still put too many obstacles in their path."

Bahrain ranks first place in the 2018 survey. The country makes it easy for people to feel welcome and settled, and the working conditions are favorable. Expats also felt good about life in Taiwan, which ranks second for its "quality of life," InterNations head Zeeck says.

More than 18,000 expats in 187 countries were questioned about their experience living in a foreign country; 1,692 expats participated in Germany. The survey did not focus on facts — comparing the cost of living, for instance — as much as on people's personal perceptions. At least 75 participants per country were required, and in the end, 68 countries were part of the ranking.

For the first time, the survey also looked at the quality of "digital life," another reason why Germany did so poorly in the ranking. Estonia is a pioneer in that respect, a country where all citizens can take care of administrative affairs online and even young children learn about the importance of cyber security.

In all things digital, Germany ranked 53rd in the InterNations survey. "Only 29 percent of the participants in Germany say access to fast internet is easy from their home," says Malte Zeeck, who spent many years living in India. On a global level, the figure is much higher: 41 percent.

Expats also largely find it onerous to get a mobile phone and bemoan the Germans' reluctance concerning electronic payments versus cash, Zeeck says, adding that these sectors could be improved in no time. "It should be possible to digitalize public administration systems, to make them available in English, enable fast internet and electronic payments."

Germany's 'Little Britain' forced to close down — for now

With Brexit in mind, Gary Blackburn set up his show of Britannica to bring together Germans and Brits. Then he was told "Little Britain" was illegal. The Englishman is determined to get it right, even if it takes years. (31.08.2018)